Its Bolivian setback has not deterred Naveen Jindal's quest for overseas investments.

British Virgin Islands-based CIC Energy Corp yesterday disclosed that it  was in talks to sell itself to Jindal Steel & Power Ltd, a year after JSW Energy backed out from acquiring the Canadian coal developer for C$422 million.

''While negotiations are ongoing, a binding agreement has not yet been signed.  Therefore there can be no assurance that any transaction will result from these discussions, or as to the timing, structure or terms of any transaction,'' the Toronto and Botswana-listed company said in a statement.

CIC, categorised as a junior coal miner, explores and develops coal properties in Botswana, where its flagship property, the A-grade steam Mmamabula Coal Field is estimated to hold 2.6 billion tonnes of high-thermal coal, with an exportable surplus of up to 20 million tonnes per annum over the next 40 years.

It is also in the process of developing the Mmamabula power complex comprising a 1,200-MW power station that is targeted primarily to supply power to South Africa.

CIC Energy also has a coal to gas project called the CTH Project, which has the potential to convert some of the coal at the Mmamabula Coal Field to gas, fuels and petrochemicals.

CIC also holds a 30-per cent stake in Botswana's 300 MW power station Mookane Domestic Power Project, currently under construction, in which GCL Projects Limited, an affiliate of Golden Concord Holdings had acquired a 70-per cent equity in March 2010.

Apart from investing in this project, CIC is also the construction contractor and operator of this power project.

Since Botswana is landlocked and exports coal via seaports in South Africa and Namibia, CIC is planning to join a transportation consortium to build the 1,500km Trans Kalahari Rail line to a Namibian port on the southwest coast of Africa that is expected to begin in June 2011.

Currently, the rail route is to the west coast of southern Africa, through Botswana to a port in Namibia.

The talks come less than a week after Jindal Steel walked away from the $2.1-billion mining and steel venture in a remote part of Bolivia, after the Bolivian government back-tracked on supplying natural gas to the projects. (See: Jindal Steel terminates $2.1-bn mining venture in Bolivia)

In September 2010, JSW Energy had agreed to buy CIC Energy for or $7.42 per share, valuing the company at around C$422 million (Rs1,878 crore). The transaction was expected to be completed by end-February 2011.

GMR Energy, the Bangalore-based power generation subsidiary of the G M Rao-controlled GMR Infrastructure, had also submitted a C$470 million bid - $55 million higher than JSW Energy's offer, but the offer was rejected since it entailed making payments in two tranches subject to finalisation of the Trans Kalahari Rail Project. 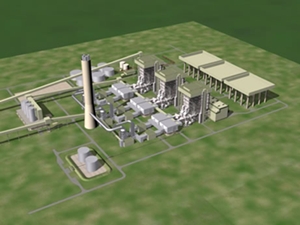 CIC Energy called off the deal in June 2011 after it said that JSW Energy failed to complete the deal by the final deadline of 31 May 2011 despite several extensions. (See: CIC Energy calls off Rs1,878 crore buyout offer from JSW Energy)

But JSW Energy had claimed that the acquisition was subject to CIC Energy meeting certain obligations, one of which included the miner settling its contractual obligations with GCL Botswana, an indirect subsidiary of Hong Kong based-Golden Concord Holding Group Ltd, the operator of power plants, coal mines, mineral mines and property development in China.

GCL had claimed that CIC Energy has a contractual obligation to agree to a power purchase agreement and a coal supply agreement, which has been refuted by CIC Energy.

Whether this dispute is resolved is not clear, but CIC Energy is reported to have collected a $10.5 million break-up fee from JSW Energy.

In March 2012, CIC Energy sold a 9.1 per cent stake in itself for C$10 million to the world's largest energy trader Vitol Energy (Bermuda) Ltd, part of the $267 billion Vitol Group of companies.

It also entered into an agreement with the Vitol Group for the right to market 60 per cent of any future export coal produced from the Mmamabula Coal Field covered by prospecting license 11/2004 - excluding the remainder of the area held by CIC Energy.

This area is expected to ultimately support the production of 20 million sales tonnes per year of export quality coal, assuming Trans Kalahari Rail line is in place to transport the coal to a port with coal export facilities.