Grounded airline Jet Airways is set to get its wings back, two years after it halted services in April 2019. The National Company Law Tribunal (NCLT) has given the go-ahead for the revival plan submitted by a consortium of UK’s Kalrock Capital and UAE-based Murari Lal Jalan for the debt-laden carrier. 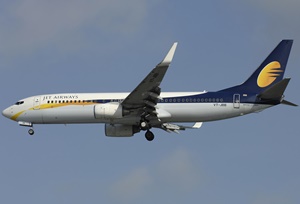 The NCLT has also directed the Director General of Civil Aviation (DGCA) and the ministry of civil aviation to allot time slots to the grounded airline within 90 days.
Jet had about 700 time slots, but after its suspension of operation in April 2019 and the start of the debt resolution process under the Insolvency and Bankruptcy Code (IBC), those slots were allocated to other airlines.
The airline operated a fleet of more than 120 planes serving dozens of domestic destinations and international hubs such as Singapore, London and Dubai at the time.
Jet Airways was facing increasing financial pressure due to rising operating costs. Added pressure from new competitors compounded the crisis. As a result, the company failed to meet several debt obligations.
Jet had to ground a significant portion of its fleet after defaulting on lease payments. Soon after, Indian Oil Corporation (IOC) stopped supplying fuel to the beleaguered carrier over uncleared dues. Jet Airways had to soon shut down operations completely as it ran out of cash to conduct any further flights and its lenders rejected an infusion of Rs400 crore as emergency funding.
When talks with the Hinduja Group and Etihad Airways for investing in Jet Airways fell through, the creditors of the company moved to the NCLT to formally start the insolvency process.
Jet Airways’ Committee of Creditors had, in October 2020, approved the resolution proposal of the Kalrock-Jalan consortium that had offered to repay banks, financial institutions and employees and establish Jet Airways as a full service airline.
Jet Airways owes more than Rs 8,000 crore to banks.
Grant Thornton and SBI Capital were placed as professional advisor and process advisor, respectively, in the resolution procedure. The NCLT gave a 90-day timeline for the resolution process.
The Kalrock-Jalan consortium is believed to have offered to repay Rs1,183 crore over a period of five years to financial creditors, employees and other staff of Jet Airways. It has also offered about a 9.5 per cent stake in Jet Airways and a 7.5 per cent stake in Jet Privilege to financial creditors.
Some key lenders to Jet Airways are SBI, Yes Bank, IDBI Bank and Canara Bank. While Jet Airways faces claims of over Rs15,000 crore from various creditors under IBC, 13 domestic banks and financial institutions led by SBI have made claims of Rs5,776 crore.
In the meantime, the company was facing cross-border insolvency in the Netherlands as well.
In the face of mounting claims, no buyers emerged within the original timeline. An extension of 180 days was granted, during which South American conglomerate Synergy Group Corp, Russia-led Far East Development Fund, Prudent ARC, and a reinterested Hinduja Group considered bidding for the airlines.
Out of the many speculated bidders, the Committee of Creditors received just one bid, from Synergy Corp. The bid, however, was rejected since it came with the stipulation of writing off a significant portion of the debt, and converting the remaining into equity.
The spread of the Wuhan virus further complicated the resolution process, with fewer buyers coming forward to revive an insolvent company in one of the hardest hit sectors.
In June, the NCLT granted permission to the airline to sell its Bandra Kurla Complex for about Rs500 crore. The payment was immediately utilised by the bank to settle mortgage debts to HDFC and US-based Exim Bank. The payments helped unencumber six aircraft with a total value of $200 million.
Since then, UK investment fund Kalrock Capital along with Murari Lal Jalan, a UAE-based entrepreneur, emerged as leading candidates. Imperial Capital Investments LLC from Abu Dhabi and Flight Simulation Technique Centre (FSTC) were the second consortium to submit their bids. FSTC later submitted an improved bid, but as the bid was outside the deadline, the Kalrock-Murari Lal Jalan bid was accepted.
The NCLT approved the Kalrock-Murari resolution bid and set the stage for Jet to resume its operations after receiving slots and rights from the ministry of civil aviation. With the resolution process closed, Jet Airways became the first airline to go through the insolvency process under IBC in India.
If all goes well, Jet Airways will fly again by the end of the calendar year. It will initially operate on 20 routes, with 20 narrow body aircraft and 5 wide-bodied aircraft, according to the advisors.
MORE REPORTS