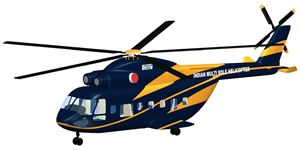 Safran SA designs, develops and manufactures aircraft engines, rocket engines as well as various aerospace and defence-related equipment or their components.
HAL CMD R Madhavan and Safran Helicopter Engines CEO Franck Saudo signed a memorandum of understanding (MoU) towards this in the presence of Safran CEO Olivier Andries.
The new aero-engine company will be dedicated to the development, production, sales and support of helicopter engines.
The joint venture will meet the requirements of HAL and the defence ministry (MoD) in the development of future helicopters, including the future 13-ton Indian Multi Role Helicopter (IMRH).
This MoU is in line with the Indian government’s vision of “Atmanirbhar Bharat”, or achieving self-reliance – particularly in defence technologies, says Safran Helicopter Engines, Safran stated.
“The creation of this new joint venture marks a turning point in our relationship with HAL and the Indian MoD with the development and production of a new generation of helicopter engine. We are proud to further expand our structured partnership with HAL, which began more than 50 years ago, and which was recently illustrated with the development and production of the Shakti engine and the inauguration of our joint venture Helicopter Engines MRO Pvt Limited (HE-MRO),” Franck Saudo said.
“With a fleet of over 1,000 engines, India’s armed forces are one of the largest operators of Safran-designed helicopter engines,” he added.
“Safran Helicopter Engines has been our valued partner for several decades. We now look forward to utilise this opportunity to leverage HAL’s experience in manufacturing of more than 15 types of aircraft and helicopter engines to jointly co-develop and manufacture engines with immediate focus on IMRH and its naval variant the Deck Based Multi Role Helicopter (DBMRH). This partnership will involve and utilise the Indian defence manufacturing ecosystem within India,” R Madhavan said.
Safran Helicopter Engines and HAL have already multiple partnerships, including the Shakti engine, which powers HAL-produced helicopters, including the Dhruv, Rudra and the Light Combat Helicopter (LCH). The Ardiden 1U variant also powers the new Light Utility Helicopter (LUH). More than 500 Shakti engines have already been produced
Through HE-MRO joint venture in Goa, Safran Helicopter Engines and HAL will also provide MRO (Maintenance, Repair and Overhaul) services for TM333 and Shakti engines in service with Indian armed forces. It will be readyby the end of 2023.
The largest maintenance, repair and overhaul (MRO) facility in the country, being established by Safran, is likely to be fully operational by 2025.
Olivier Andries, chief executive officer of Safran, said that through creation of the company’s largest maintenance and repair centre for commercial engines, they are also paving the way to expand their MRO activities in India to military engines. The facility will be established with an investment of $150 million and generate 1,000 jobs.
The facility will start operations in 2025 and will eventually offer an annual capacity of 250 to 300 engine shop visits. The LEAP and its predecessor, the CFM56, now power over 330 Airbus A320/A320neo and Boeing 737/737 MAX aeroplanes deployed by airlines in the Indian subcontinent. More than 1,500 LEAP engines are currently on order in the region, Andries said.
Jean-Paul Alary, chief executive officer of Safran Aircraft Engines, announced the creation of a MRO facility for CFM LEAP engines which would be built near its new plant.
“Our new MRO 4.0 centre in Hyderabad will strengthen our global network and enable us to meet the needs of our CFM customers against a backdrop of booming air traffic in India and the region. We will benefit from the fast growing aviation ecosystem and outstanding competence in Telangana” he added.
MORE REPORTS