Hindustan Aeronautics Limited (HAL) has come out with a modified version of its Intermediate Jet Trainer HJT-36 `Sitara’, three years after the plane was grounded. 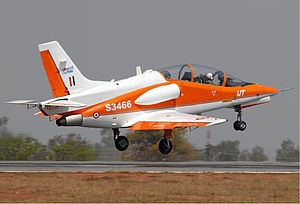 The state-owned defence aerospace major has now recommenced flight testing of the modified intermediate jet trainer (IJT) for the armed forces at its Bengaluru facilities.
IJT Sitara, which has undergone some critical modifications, took to the skies in a test flight at the company’s Bengaluru facilities.
Sitara made a flawless flight during Wednesday’s test, making an important step forward in the IJT programme. IJT (HJT36), designed and developed by defence and aviation major HAL for stage-II training of IAF pilots, was put on hold after the aircraft encountered a problem in spin test flights in 2016.
“HAL continued its R&D efforts and undertook modification of the IJT LSP4 aircraft based on extensive and comprehensive wind tunnel studies,” said R Madhavan, CMD, HAL.
After the failed spin tests, the company has been doing extensive research, and the design and technical teams have carried out the modifications required and is keen to identify any further challenges.
The IJT `Sitara’ has been facing issues from the developmental stage, after it crashed in 2011. Since last year HAL has put the IJT through fresh wind tunnel tests after a design upgrade, during which the aircraft was deliberately stalled midair and recovered as part of the training process.
The Rs2,989-crore project, started in 1999, failed after the trainer aircraft was unable to prove its ability to get out of a stall and spin, a critical feature needed in a trainer aircraft that is to be used for training fresh pilots.
In 2014, HAL sought the help of UK based BAE Systems in re-designing the aircraft tail which could meet all specifications of the IAF.
After passing the tunnel tests, today’s flight test was critical for the IJT and it is expected to move to the next stage of development before it is fully safe for the trainees. Sitara, if successful, could be produced for replacing the current `Kiran Mk II’ aircraft fleet by 2020.
The IJT programme has been facing problems from the beginning, forcing HAL to change its time lines at least four times. The aircraft, which was scheduled to be inducted in 2015, is now expected to be inducted in 2020.
The IAF has been forced to modify its training programme for pilots from a three aircraft plan to two aircraft plan due to shortage of trainers.
The IJT was meant to provide high-speed training for IAF pilots entering the second stage of training, before they move on to an advanced jet trainer (AJT) to finally learn the art of combat flying.
MORE REPORTS