'Adult supervision no longer needed': Eric Schmidt to step aside at Alphabet

Eric Schmidt, a long-serving Google executive, will step down as executive chairman of Google's parent company Alphabet in January, the company announced on Thursday. 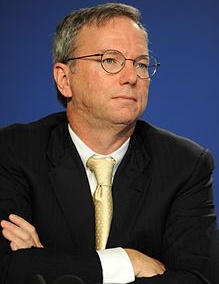 Schmidt will become a technical advisor to the company while continuing on its board.

''Since 2001, Eric has provided us with business and engineering expertise and a clear vision about the future of technology,'' Larry Page, chief executive officer of Alphabet, said in a statement.

''Continuing his 17 years of service to the company, he'll now be helping us as a technical advisor on science and technology issues,'' Page added.

''Larry, Sergey, Sundar and I all believe that the time is right in Alphabet's evolution for this transition. The Alphabet structure is working well, and Google and the Other Bets are thriving.

''In recent years, I've been spending a lot of my time on science and technology issues, and philanthropy, and I plan to expand that work," Schmidt said in a statement.

"Adult supervision no longer needed," Schmidt tweeted in a reference to a comment co-founder Sergey Brin made on the Charlie Rose show when Google first hired him.

Page and Brin founded Google in September 1998. Since then, the company has grown to more than 70,000 employees worldwide, with a wide range of popular products and platforms like Search, Maps, Ads, Gmail, Android, Chrome and YouTube.

In October 2015, Alphabet became the parent holding company of Google.

Schmidt first joined Google as CEO in 2001, back when the company only had several hundred employees, and become its executive chairman 10 years later. He maintained that role when Google restructured to become Alphabet in 2015.

''After ten years as CEO and seven as executive chairman, I can't wait to dive into the latest in science, technology, and philanthropy. I look forward to working with Larry and Sergey on our future here at Alphabet,'' Schmidt tweeted.

Schmidt was often the face of Google and Alphabet with policymakers.

In the past several years, he has become increasingly involved in philanthropy through his own family foundation, which just launched a $25 million science fellowship, as well as Rise of the Rest, which invests in startups in middle America, and the Alliance for Southern California Innovation.He also serves as a board member of the Broad Institute, which focuses on medicine and disease prevention.