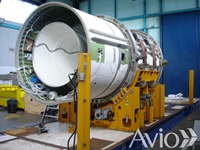 The deal did not include the Italian company's space assets.

The US Federal Trade Commission (FTC) had opposed the deal on the ground that the acquisition would give GE the ability and incentive to disrupt the design and certification of Avio's accessory gearbox (AGB) for the PW1100G engine used on its competitor Airbus A320neo aircraft.

Avio, together with Rolls-Royce of the UK, MTU of Germany and ITP of Spain, is a member of the Eurojet consortium which designs and manufactures the Eurofighter Typhoon's EJ200 engine. Avio is a key supplier to this programme and, by extension, to the Eurofighter project which competes with other combat aircraft powered by GE engines for sales in export markets.

The regulator's investigation showed that the deal would have allowed GE to acquire a significant degree of influence over the Eurojet consortium and gain access to strategic information of one of its main competitors in the international market for fighter aircraft.

GE would therefore have been in a position to prevent the Eurofighter from offering an alternative to GE-powered platforms and would diminish competition in the sale of engines for the A320neo, which would result in higher prices, reduced quality, and engine delivery delays for A320neo customers.

The FTC approval was contingent on GE agreeing to not interfere with Avio's AeroEngine division's development of a key engine component for GE rival Pratt & Whitney.

GE, Avio, and Pratt & Whitney agreed that GE will not access Pratt & Whitney's proprietary information about the AGB that is shared with Avio.  A FTC order allows the regulator to appoint a monitor to oversee GE's compliance with its obligations.

In addition, the proposed order prohibits GE from interfering with Avio staffing decisions as they relate to its work on the AGB for the PW1100G engine and allows Pratt & Whitney to have representatives on-site at the GE/Avio facility.

If Pratt & Whitney terminates its agreement with Avio post-merger, the FTC ruled that GE must provide transitional services to help Pratt & Whitney manufacture AGBs and related parts for its PW1100G engine.

Since the European approval was also required for the deal, the FTC worked closely with the European Commission (EC) throughout the investigation.

The FTC and the EC investigated in parallel how GE's acquisition of Avio would change its commercial relationships with GE's rival aircraft engine manufacturers.