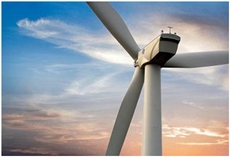 GE, which split its renewable energy business and power unit last year after acquiring Alstom SA's power business for $13.6 billion, said that the deal will allow it to in-sources wind turbine blade design and manufacturing and improve its ability to increase energy output and create value for onshore and offshore customers.

The acquisition is valued at 8.3 times pro forma earnings before interest, taxes, depreciation and amortization (EBITDA) and is expected to close in the first half of 2017.

Post closing, GE intends to operate LM Wind Power as a standalone unit within GE Renewable Energy and will continue to be led by its existing management team and be headquartered in Denmark.

GE Renewable Energy is a $9-billion dollar start-up and has one of the broadest product and service portfolios of the renewable energy industry.

With its onshore and offshore wind, hydro and innovative technologies such as solar power, GE Renewable Energy has installed more than 370 gigawatts capacity globally, and employs 13,000 people in more than 55 countries.

GE Renewable Energy generated $6.27 billion in revenue in 2015, accounting for about 6 per cent of GE's total industrial segment revenue.

The company has 190 patents, produced more than 185,000 blades since 1978, corresponding to more than 77 GW installed capacity and global savings of more than 147 million tons of CO2 annually.

Jérôme Pécresse, president and CEO of GE Renewable Energy said, ''We, along with LM Wind Power, have a deep pipeline of technical innovations that can further reduce the cost of electricity.''