A Fortis hospital at Gurugram, which became notorious after a dengue death, was found to have charged 1,700 per cent or higher margin on consumables and medicines used for the treatment of a seven-year-old who subsequently died. 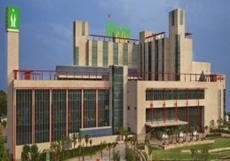 The National Pharmaceutical Pricing Authority (NPPA) said on Friday the Fortis Memorial Research Institute had charged a margin of up to 1,737 per cent over the procurement price of a three-way stopcock.

The drug price regulator had sought details from the hospital following allegations by the patient's parents that the hospital overcharged for medicines, gloves and syringes. The NPAA found the hospital had charged over 900 per cent on some non-scheduled drugs and up to 300 per cent on many scheduled (under price control) drugs.

A syringe procured for Rs15.29 was charged at Rs200, a blood transfusion set bought for Rs13 was billed at Rs126 and a drug bought for Rs400 was sold at Rs3,100. On an average, the hospital has charged at least double the procurement price for most items.

"NPPA shall be taking necessary follow up action as per existing law and within its jurisdiction", the regulator said.

The NPPA had issued notice to the hospital following allegations of over-charging by the parents of the girl who died at the hospital after receiving dengue treatment for over two weeks in September. The authority had sought copies of the bills raised, names of the medicines administered and details of quantity and price charged.

The parents of the girl had complained that they were billed heavily for 1,600 gloves, 660 syringes and many high-end antibiotics. The data shows that on syringes alone the margin charged by the hospital ranged up to six times the procurement price (bought for Rs3.50 and sold for Rs20.50). On gloves, the margin ranged from up to 660 per cent.(See: Gurgaon Fortis hospital faces action over dengue death, Rs16 lakh bill).

The NPPA found that of the 41 non-scheduled medicines, in the case of 20, the billing price ranged from 111 per cent to 919 per cent more than the price at which the hospital bought them.

On the scheduled drugs, Fortis charged margins up to 343 per cent. In the case of 17 of them, the margin was over 100 per cent According to the law, drug retailers can only charge 16 per cent margin on scheduled drugs.

In an office memorandum released late on Friday, NPPA displayed the prices at which Fortis procured the medicines from the distributors, the maximum retail prices at which the hospital billed the family and how much each medicine and consumable was marked up.

Replying to the allegations of overcharging, Fortis Healthcare in a statement said that it does not charge ''any drug or consumables above the printed MRP and there is no violation of drug price control order''.

It further said, ''It should also be noted that our end price to the patient is very much in line with what other private hospitals in India charge. Looking at individual prices of any single item as a standalone takes the margin/profit topic out of context. To understand the total profit scenario and overall business performance, one should look at the financial margins for the Fortis hospital business. As such, it should be noted that the Fortis hospital business reported operating profit (EBITDA) over the last four published quarters of 5 to 6 per cent and a negative PAT (profit after tax) for the same period of time.''

Rajiv Nath, forum coordinator at Association of Indian Medical Device (AIMED), told the Mint, ''We are interested in systemic correction and not witch hunting and have been highlighting this malady infecting our healthcare system for many years - the problem is government does not act, and when it does regulate, it seems to be overkill at times. Encourage ethical manufacturers, ethical traders and ethical healthcare providers.''