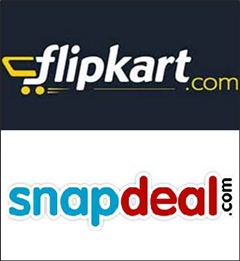 The Softbank-backed merger deal, the largest-ever in the Indian e-commerce sector, values Snapdeal in the range of $950 million to $1 billion, according to media reports.

The merger, backed by Snapdeal's largest investor, the Japan-based internet and telecom conglomerate, is likely to see the exit of Snapdeal founders Kunal Bahl and Rohit Bansal.

The merged entity will create a stronger competitor to global online retailer Amazon, which is using all available means to establish itself as leader in the Indian online market place.

Flipkart may soon begin the formal due diligence process

Softbank's move for merger of Flipkart and Snapdeal got delayed because of certain reservations from its early investors like Kaalari Capital and Nexus Venture Partners on the valuation of Snapdeal. They have, however, come around to agree to the deal.

Snapdeal was valued at $6.5 billion in its last funding round in February 2016. The valuation, however, has shrunk since and the potential deal is expected to see Snapdeal being valued below $1 billion.

SoftBank had said earlier last week that it suffered a loss of $1 billion (Rs6,500 crore) on its investment in Snapdeal during 2016-17.

SoftBank currently owns over 30 per cent in Snapdeal, while Nexus has roughly 10 per cent and Kalaari holds 8 per cent share in the firm.

This deal will also mark another large acquisition for Flipkart which in the past has acquired companies such as Myntra and Jabong.

Reports had earlier said that after the proposed merger, the Snapdeal brand might cease to exist, unlike Flipkart's earlier acquisitions – Myntra and Jabong.

Flipkart had acquired Myntra and Jabong in 2014 and 2016, respectively. These are being run independently as part of the group. However, this will not be the case for Snapdeal, which will cease to exist as a separate entity.

Other companies owned by Snapdeal's parent, Jasper Infotech, such as online wallet FreeCharge, acquired in April 2015 for $400 million, might also cease to exist.

However, the merger is reported to be positive for 1,500-odd employees who might be offered a Rs193-crore bonanza when taken over by Flipkart.

Snapdeal founders are also expected to part with a large share of their payout for a proposed scheme which would cover all current employees of Snapdeal.

According to regulatory filings, SoftBank currently owns over 30 per cent in Snapdeal, while Nexus has roughly a 10 per cent stake and Kalaari holds 8 per cent share in the firm.