Ford Motor Co has revealed the world's first ''pursuit-rated'' hybrid police car and the Los Angeles Police Department (LAPD) might be among the first  to have one. 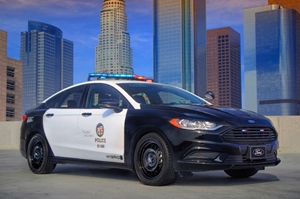 The vehicle will be introduced to the public at a ceremony today in Los Angeles.

The Ford Police Responder Hybrid Sedan is basically a modified Ford Fusion with upgraded suspension, more powerful brakes, different wheels and tyres, a skid plate more spacious seats and an ''anti-stab'' plate to protect officers from attack with sharp instruments from the back seat.

The Responder is powered by Ford's 2.0-litre, four-cylinder gasoline engine coupled to an electric motor powered by a 1.4-kilowatt lithium ion battery. According to Ford, that powertrain would provide an EPA-estimated 38 miles per gallon, more than twice the fuel economy offered by Ford's current police vehicle, the Interceptor.

Ford had not published specifications on the new vehicle yet, however, according to Arie Groeneveld, of the company's police programs department, the Responder would accelerate from zero to 60 mph at about the same rate as the Crown Victoria-based Interceptor police vehicle.

The Responder won a pursuit rating when tested by the Michigan State Police and Los Angeles County Sheriff's Department, the first hybrid to earn that honour.

The honour goes only those cars that perform to requirements of acceleration, handling, braking, top speed and ergonomics and make the list of cars that the Michigan and Los Angeles agencies would buy.

When the throttle is held down for five seconds, the car shifts into the pursuit mode, using both the electric motor and the gas engine for maximum performance, Ford said. The company also claims the car would be durable for tough police duties.