Ford Motor Co and Mahindra & Mahindra are expected to sign a deal next week to form a joint venture under which the US carmaker will end most of its independent operations in the country, a Reuters report citing sources close to the development said. 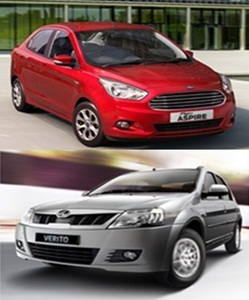 Mahindra and Mahindra Ltd and Ford Motor Co had in April this year signed a deal to jointly develop midsize sports utility vehicles in India.
In a joint statement, Ford and its affiliate companies had proposed to invest Rs680 crore for co-development of the vehicle over a period of 10 years.
The joint venture deal is seen as the culmination of months of discussions over structuring the deal to create a new entity.
Under the proposed deal, Ford will hold 49 per cent in the joint venture while Mahindra will own 51 per cent.
Under the deal Ford will transfer most of its automotive assets, including its two manufacturing plants - one in Chennai and the other in Sanand which was inaugurated in 2015 – along with its employees and other assets, will be moved to the new joint venture, but Ford will keep the engine plant at Sanand in Gujarat, according to the Reuters report.
Together, the two plants have a maximum annual manufacturing capacity of 440,000 vehicles.
Ford and Mahindra hope the joint venture will not only strengthen their ongoing partnership but also sharpen their competitiveness in an important emerging market like India, Jim Farley, president of Ford New Businesses, Technology & Strategy had said in April.
The JV will combine Ford's technological leadership with Mahindra's successful operating model and product prowess, thereby helping to deliver a vehicle that will meet the expectations of customers in India and emerging markets.
Ford-brand cars will continue to be built and sold in India and exported by the new company, one of the sources said.
In 2017 Ford it formed a strategic alliance with Mahindra under which, among other things, they were to develop new cars together, including SUVs and electric variants.
In India, currently, Ford manufactures and sells its cars via its wholly owned subsidiary.
Dearborn, Michigan-based Ford has spo far invested more than $2 billion in India but has a share of only 3 per cent.
MORE REPORTS