American oil and gas major Exxon Mobil, facing two major charges, is battling it out furiously but failing to win over support. 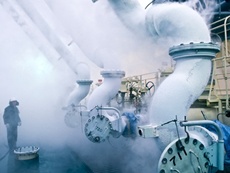 In one case involving the company, a federal judge dismissed its lawsuit that wanted an end to a probe by New York and Massachusetts officials into whether it misled investors and the public on the issue of climate change.
And in the second case, Global Witness, an anti-corruption group, accused it of buying rights to drill in West Africa despite knowing that the project had been awarded to a company that paid bribes.
A Manhattan US District judge dismissed Exxon’s allegations that the New York attorney general and his counterpart in Massachusetts were pursuing “bad faith investigations” to violate its constitutional rights.
Exxon’s lawsuit was “running roughshod over the adage that the best defense is a good offense,” said the judge.
The oil giant was subpoenaed in 2016 by the law officials to find out Exxon’s research into the role of fossil fuels in climate change. But the company dismissed their probe as “politically motivated” and said Democrats were trying to snatch their free-speech rights.
Following the judgement, Exxon said it was reviewing the decision and evaluating further steps. “We believe the risk of climate change is real and we want to be part of the solution,” said the company. “We’ve invested about $8 billion on energy efficiency and low-emission technologies such as carbon capture and next generation biofuels.”
In the second major problem confronting the company, Global Witness in a 40-page report accused Exxon of paying $120 million in 2013 through a Canadian middleman for rights to explore oil in Liberia.
The amount allegedly included $200,000 in payments from Liberia’s oil agency to six government officials who approved the deal.
MORE REPORTS