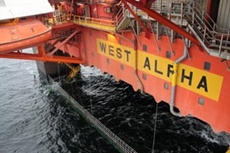 Russian president Vladimir Putin launched the start of drilling from Sochi during a teleconference with Rosneft CEO Igor Sechin and ExxonMobil's chief Glenn Waller at the site.

"Today, commercial success is driven by efficient international cooperation. Businesses, including Russian and foreign companies, perfectly realise that and despite certain current political difficulties, pragmatism and common sense prevail, and we are pleased to hear that," Putin said.

The US and the European Union have imposed a series of severe sanctions against Russia recently following its alleged involvement in the crisis in Ukraine and downing of a Malaysian passenger jet over eastern Ukraine in mid-July.

The sanctions cover key areas like energy, finance and defence. In retaliation, Russia last week imposed sanctions against food products from the US and the EU, Canada, Australia and Norway.

The 30,700-tonne 'West Alfa' drill rig for the operation was provided by Norway's North Atlantic Drilling.

The Arctic development is considered to be of great significance to the Russian economy, while ExxonMobil is looking to ramp up oil and gas production which was at its five-year low in the second quarter hitting 3.8 million barrels of oil equivalent per day (mboed) or 6 per cent lower than a year ago.

Igor Sechin, CEO of Rosneft and a close ally of Putin, said: "As a result of this work, we are hoping to open a new Kara Sea oil province, which according to experts' estimates, would surpass the capacities of the oil and gas regions of Gulf of Mexico, the Brazilian, Alaskan and Canadian Shelves and would match the resource base of Saudi Arabia.''

He added that the project has huge multiplier effects on the Russian economy and will also contribute to the global energy security.

Exxon's plans were apparently not impacted by sanctions as its contract with Rosneft had been signed prior to the sanctions.

The Universitetskaya-1 is just the beginning of a series of drilling projects planned by the two companies in the region which is estimated to contain about nine billion barrels of oil, according to Rosneft.

Rosneft's Q2 profit was above forecasts at $4.8 billion, nearly five times more compared to a year ago. Sales for the period were around $40 billion.

Two months ago, Rosneft and Irving, Texas-based ExxonMobil launched the Berkut oil and gas rig in the Sea of Okhotsk in Russia's far east.

Exxon Mobil and Rosneft are also in a partnership to increase oil production in the Rosneft's Sakhalin-1 project in the far east of Russia. ExxonMobil is building the country's largest offshore oil and gas platform at the Arkutun-Dagi oil field which is expected to start producing about 90,000 barrels per day of oil late this year.

In 2013, Russian and US giants inked lucrative oil and gas deals extending a strategic joint venture agreement signed in 2011 and the current development is part of the joint Arctic exploration project. Besides, the companies have also agreed to establish an Arctic research centre to support their joint ventures worldwide.