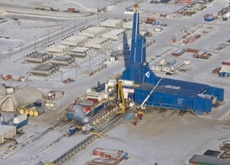 US-based companies could see their interests severely hurt in Russia if the Putin regime was slapped with sanctions by western governments or the UN over its intervention in Ukraine's Crimea region.

Bloomberg reported under the terms of a 2011 contract with state-controlled OAO Rosneft, Exxon had drilling rights across 11.4 million acres of Russian land, its biggest exploration holding outside the US.

The company's plans could be hit even as the company planned to start drilling in the Russian Arctic later this year in partnership with Rosneft.

The lucrative Sakhalin-1 oil license off Russia's Pacific Coast could end up as among the first casualties of a standoff between Russia and US.

Since Tillerson took over the top post at Exxon in January 2006, the company's stock had shot 65 per cent, lagging the 77 per cent advance in the price of crude, according to data compiled by Bloomberg.