With energy giant ExxonMobil agreeing to acquire Kosmos Energy's stake in Ghana's Jubilee oil field for $4 billion yesterday, private equity firms having a majority stake in Kosmos Energy are poised to make whopping profits on their investment in a very short span of time. 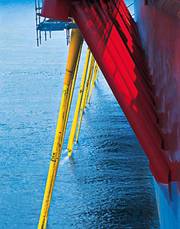 Discovered in 2007, the Jubilee oil-field, off the Ghana coast, is one of the largest offshore oil finds in the last decade in West Africa. The field is divided into two licence areas -West Cape Three Points and Deepwater Tano.

Privately held Kosmos Energy, which has oil stakes in West Africa, owns a 30.875-per cent stake of the West Cape Three Points Block and 18 per cent of Deepwater.

Tullow Oil PLC, Anadarko Petroleum Corp. and Ghana National Petroleum Corp are among the other stakeholders in the Jubilee oil field.

Kosmos had said in July 2009 that the Jubilee oil field could potentially hold 650 million barrels to 2 billion barrels of oil equivalent and that production was slated to start in late 2010, and would eventually pump about 120,000 barrels a day.

Private Equity firms, Blackstone Group and Warburg Pincus hold a majority stake in Kosmos Energy through their first round of funding of $300 million in 2004 to explore for oil and gas in Africa, and put up an additional $500 million in 2008 after the discovery of the Jubilee oil field was made in late 2007.