In one of India's the biggest oil deals, the Essar Group on Thursday signed a $10-billion contract to import crude oil from Russia over a 10-year period. 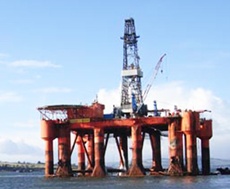 The agreement will ensure a secure market for the sanctions-hit Russian oil giant while Essar will have reliable and stable supplies of oil and oil products to its refining facilities.

The deal was among a host of agreements being signed during Russian President Vladimir Putin's visit to India and talks with Prime Minister Narendra Modi.

Moscow-based OAO Rosneft chairman Igor Ivanovich Sechin said the agreement was to ship the oil by sea to the Essar refinery in Gujarat. He added that the deal could be extended beyond 10 years.

"Rosneft and Essar signed key terms of oil and oil products supplies to Essar refineries in India. Supplies may begin in 2015," Essar Oil, which operates a 405,000 barrels per day (bpd) refinery at Vadinar in Gujarat, and Rosneft said in a joint statement here.

This is one of the biggest oil import deals any Indian refiner as signed. Reliance Industries' 15-year deal to purchase 300,000 bpd to 400,000 bpd crude oil from Venezuela is possibly the biggest by an Indian company. Essar's 200,000 bpd (10 million tons a year) contract may be the second biggest.

"Consequently Rosneft expands its distribution area and builds up deliveries to the region, where the world's economy growth zones are concentrated," the statement said.

Essar head Shashi and Sachin Ruia signed the agreement in the presence Putin and Modi.

"The reached agreement opens new horizons of cooperation between the two countries, thanks to the synergistic potential of the partnership in upstream and downstream areas of two leaders of the oil and gas industry of Russia and India.

Sechin said the agreement will have a "substantial impact on the scale of economical cooperation between Russia and India."

"For our Indian partners the signing of this agreement represents a vital element of basic supplies diversification which, at the same time, will ensure energy security for the country. The Russian counterpart, in turn, will get the possibility of production and supplies volume planning to a new region with considerable growth potential," he said.

''We are happy to partner Rosneft for long-term supply of crude oil and products. This provides good long-term raw material security to our refineries,'' said Essar group chairman Shashi Ruia.

The central government has sanctioned Rs228 crore for setting up solar power plants across and on the banks of canals on all feasibile locations across the country.

The funding will support the government's target of 100 megawatt (MW) capacity on canal banks and canal tops by 2017. India currently has two canal top solar power projects, both on the Narmada canal in Gujarat.

Government has estimated the total cost of setting up 100 MW of canal bank and canal top solar power plants at Rs975 crore and proposes to provide subsidies to the extent of Rs228 crore for this.

The objective is to gainfully utilise the unutilised areas on top of the canals and also the vacant government land along the banks of canals wherever available for setting up solar power generation plants for feeding power to the grid, the ministry of new and renewable energy has said.