Essar Energy Plc's largest shareholder, Essar Global Fund Ltd, yesterday said that it has offered to buy the 22-per cent stake it does not own in the London-listed oil and gas producer, for £900 million. 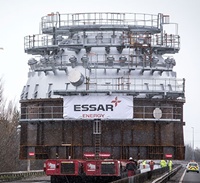 Essar Global, the Ruia family's investment vehicle, has offered to pay minority shareholders of Essar Energy 70 pence a share ($1.17), a premium of 4 pence a share to Essar Energy's Friday closing price of 66 pence.

Essar Global also said it will offer to buy Essar Energy's 4.25 per cent convertible bonds at a price of 80 cents.

Following receipt of the proposal from Essar Global, Essar Energy said that it has formed an independent committee of the board to consider its terms, who ''will act in accordance with their duties as directors and, in particular, in order to protect the interests of the company's minority shareholders.''

Capital World Investors and Standard Life are among the minority shareholders of Essar Energy.

London-based Essar Energy is a low-cost integrated energy company focused on India and has assets worth $16 billion across the power and oil and gas industries.

Essar Energy's owns the Vadinar refinery, the second-largest private sector refinery in India, the Stanlow refinery in the UK, a 50 per cent stake in the Kenya Petroleum Refinery Limited and a network of 1,400 retail fuel outlets in India.

In the oil and gas sector, the company has 15 blocks and fields in in India, Indonesia, Madagascar, Nigeria and Vietnam, while its power unit has seven operational power plants in India and one in Algoma, Canada, with a total installed capacity of 3,910 MW.