The deal for Essar's 33-per cent stake in Vodafone Essar, which was earlier signed in April 2011 for $5 billion, is now valued at $5.46 billion, including a withholding tax. The British telecom operator has agreed to compensate the Essar group for a tax payment, which was not features into the original agreement. 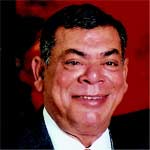 ''We were one of the early entrants in the telecom space in 1995 and we are really pleased that Vodafone Essar has grown to become one of the premier telecom companies in the country with over 140 million subscribers. We have also enjoyed an extremely successful relationship with Vodafone and we wish them all success in the future,'' Shashi Ruia, chairman Essar Group said in a press release.

The transfer of shares will be completed after obtaining all necessary approvals, the firms said in separate releases issued on Friday.

Essar Group is a business conglomerate with presence across steel, oil and gas, power, communications, shipping ports and logistics, construction and minerals. With operations in over 25 countries, the group employs 70,000 people, and has over $20 billion in revenues.