Lender banks will start the first insolvency proceedings against a defaulter company under the new law with the Ahmedabad bench of the National Company Law Tribunal (NCLT) admitting their petition against Essar Steel India Ltd (ESIL) on Wednesday. 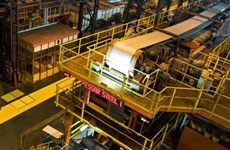 Lenders SBI and Standard Chartered also appoints professional from Alvarez & Marshal India as the Interim Resolution Professional (IRP) to present their case in the first insolvency proceedings to commence against a big-ticket defaulter under the newly enacted Insolvency and Bankruptcy Code (IBC), 2016.

The decision comes as a major setback for the Ruias-controlled ESIL, which had a total debt of Rs45,000 crore on its books.

The NCLT bench chaired by Justice Bikki Raveendra Babu rejected Essar Steel's plea to dismiss the insolvency proceedings and ordered the appointment of the SBI-nominated Satish Kumar Gupta from Alvarez & Marsal India as the IRP, as required by the Code.

StanChart's counsel had sought the appointment of Ernst & Young partner Dinkar Venkatasubramanian as the IRP.

SBI-led consortium of lenders has a 93 per cent share of the total Rs45,000 crore outstanding with ESIL..

Besides, ESIL had defaulted on its guarantee worth Rs3,700 crore to StanChart for Essar Steel Offshore Ltd, one of its subsidiaries in Mauritius.

The Interim Resolution Professional will get 180 days to come out with a resolution for the company to repay the loan, under the terms of the code. The plan has to be approved by the committee of lenders by a 75 per cent majority before being filed with the NCLT.

The maximum permitted time is 270 days for such a plan to get approved, failing which a liquidator will be appointed to initiate the liquidation.