Dow Chemical Co. and DuPont Co, two of America's oldest and biggest companies, are in advanced talks to merge, as weakening demand for some of their most famous products force the two to restructure business, say reports. 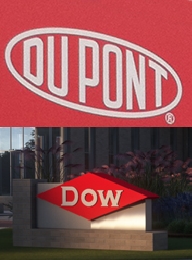 Reports citing sources close to the developments said talks are in an advanced stage between the two chemical giants, which have a market capitalisation of about $60 billion each.

The merger talks between Dow Chemical Co and DuPont, following investor pressure to realign business strategy, could result in the creation of an entity worth $120 billion.

But that combination will be short lived as the two will split further into three companies focused on agriculture, specialty chemicals and materials, says a Wall Street Journal report.

Meanwhile, a Reuters report quoting sources and other media said it would be a "merger of equals", with DuPont's stock valued at as around $82 and Dow's at $68.

Dow and DuPont are struggling to cope with falling demand for farm chemicals, especially crop-protection chemicals, even as the companies' plastics units have reported a rise in margins thanks to low natural gas prices.

The news boosted stocks of both companies, which jumped as much as 12 per cent on Wednesday. The Dow share rose to a record high of $56.80 while DuPont hit a high of $74.62.

Dow Chemicals has been facing pressure from investors like Daniel Loeb, who had been calling for a split of the company's petrochemical business from its specialty chemical units.

DuPont, similarly, faced pressure from Nelson Peltz to separate its agriculture, nutrition and biosciences units from its building and safety materials divisions.

Although Peltz lost a proxy battle for DuPont's board in May, chief executive Ellen Kullman had to step down in October, after he lost confidence of the company's shareholders.