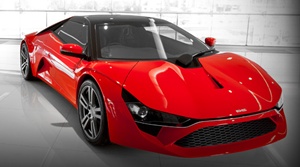 DC (Dilip Chhabria) intends to go the way of Italian 'carrozzerias' (like Bertone, Ghia, Pininfarina and Stola), who not only styled, designed and engineered sports cars but also went on to make them in limited production runs for sale to the general public.

The Avanti is being readied for a production run beginning 2013. While Chhabria, who heads his eponymous design firm, has done some amazing work over the past decade, including prototypes for many of the world's big name car manufacturers, he has never done a production run of any of his designs, concentrating on one-offs.

''We are extremely ecstatic to present the DC Avanti today,'' Chhabria said at the launch of the model. ''It is a manifestation of not just the burgeoning interest in high-end sports cars, but also as a calling card for our own capabilities, which have now progressed from mere styling in the early days to full prototyping and bespoke one-off manufacturing.''

According to Chhabria, every country, which has written its name in the pantheon of automobile manufacturing, has invariably distinguished itself with sports cars by its own nationals. ''And I thought that India rightly needs to be in this exclusive club,'' he added.