Coca-Cola halts Dasna plant in UP amidst pollution probe

Coca-Cola has temporarily halted operations at its Dasna bottling plant in Uttar Pradesh under instructions from environment authorities after the plant was seen to have violated environment norms. 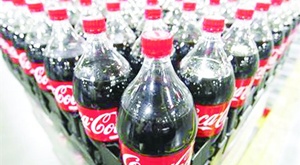 Coca-Cola, which is facing controversy over environment violations at its factories across the country, however, says it has voluntarily suspended manufacturing at the Dasna plant near New Delhi while UP State Pollution Control Board is investigating the allegations.

Local people living near Coca-Cola's Dasna plant say the factory contaminates groundwater meant for farmers and pollutes the soil, and that it is discharging untreated sewage, forcing the authorities to act.

Coca-Cola confirmed the receipt of notice from Uttar Pradesh State Pollution Control Board (UPPCB) and said it has submitted a detailed response to issues raised over the plant.

"Since UPPCB is reviewing the response, to show our commitment to compliance with regulatory norms, we decide to temporarily suspend manufacturing at Dasna plant," Hindustan Coca-Cola Beverages Pvt Ltd (HCCBL) said in a statement.

The company, however, insisted that all of its "plants operate in full compliance with all regulatory norms and Dasna plant is no exception".

The company has suspended manufacturing at Kaladera near Jaipur (Rajasthan), Vishakhapatnam (Andhra Pradesh) and Brynihat (Meghalaya).

HCCBL has 24 bottling plants at strategic locations in various states spread across India and covers approximately 65 per cent of bottling operations for the Coca-Cola System in India.

Meanwhile, in the UK, a Liverpool politician, Councillor Richard Kemp, has sought a ban on Coca Cola's Christmas truck over obesity worries.

Coca Cola's illuminated Christmas truck meant for the holiday season is a big attraction for children and this is raising childhood obesity concerns, he said.

''At each stop, family and friends will have the chance to take pictures with the truck as it lights up, and experience a snowy winter wonderland setting while enjoying a choice of Coca-Cola, Diet Coke, Coke Zero or Coke Life,'' a press release from the company read prior to last year's tour.

The twinkling truck fleet was conceived in 1995, after one appeared on television in a wildly successful seasonal advertising campaign.

Richard Kemp, who heads the Liberal Democrats on Liverpool City Council, called for shopping mall owners to ban the trucks on the same day that the government unveiled a new "Childhood Obesity Strategy."

"In Liverpool, sugar is the new tobacco. At 11 years of age, 30 per cent of the children in our city are obese, one in 10 of those are clinically obese,'' Kemp stated. "Almost all of them will become obese adults with a cost to the NHS of 5.1 billion pounds a year (6.72 billion US dollars). This takes no account of the personal misery of the conditions which have to be treated; the shortened lives that many of them will have and the cost to businesses they work for because of sick leave."

He said that he was ''appalled'' by last year's Coca Cola promotion.

"The causes are many and the actions needed to deal with them are even more varied. There is one thing on which everyone agrees. Too many children are drinking too many fizzy, sugary drinks. That is why last year in the run-up to Christmas, I was appalled to see a big promotion by Coca-Cola when its red van visited Liverpool as part of its advertising campaign tour around the country."

"To my mind this glorifies the sale of something which is often consumed in vast quantities with people having little knowledge of just how dangerous the sugar content can be to the long-term health of them and their children."