Coca-Cola today said it will pay around $2.15 billion for a 16.7-per cent stake in energy drinks and alternative beverages maker Monster Beverage. 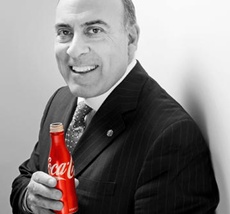 Under the terms of the deal Coca-Cola would transfer its energy drinks portfolio comprising including NOS, Full Throttle, Burn, Mother, Play and Power Play, and Relentlessto Monster.

The blockbuster deal would see around $2.15 billion paid in cash for a 16.7 per cent stake in Corona, California-based energy drink company. Under the terms  of the deal, there would be two members of Coca-Cola on the board of directors of Monster.

Muhtar Kent, CEO and chairman of Coca-Cola Company, said the company would constantly identify innovative approaches for partnerships to stay in forefront of consumer trends in the beverages industry. He added that the investment in Monster was an efficient way of bolstering participation in the lucrative fast-growing category of global energy drinks.

"The Coca-Cola Company continues to identify innovative approaches to partnerships that enable us to stay at the forefront of consumer trends in the beverage industry," said Kent. Our equity investment in Monster is a capital efficient way to bolster our participation in the fast-growing and attractive global energy drinks category. This long-term partnership aligns us with a leading energy player globally, brings financial benefit to our Company and our bottling partners, and supports broader commercial strategies with our customers to bring total beverage growth opportunities that will also benefit our core business."

Kent added, "Monster has been an important part of our global system since 2008, so we have experienced first-hand Monster's performance-driven and entrepreneurial culture, proven success in building and extending the Monster brand and their strong product innovation pipeline. We believe this partnership will create compelling and sustainable value for our system and our shareowners."

Under the terms of the deal, the stake in Monster could be increased by Coca-Cola to 25 per cent over the next four years through open market purchases, but Coca-Cola would need Monster's approval to hike stake beyond 25 per cent.

According to Rodney Sacks, chairman and chief executive officer of Monster, who spoke in a conference call with investors and analysts yesterday, this was the first time any brand had truly worked itself into the Coke global system.

Hilton H. Schlosberg, Monster's vice chairman and president, said, "Our agreement enables us to focus on our core energy business, while leveraging the strength of The Coca-Cola Company's powerful distribution and bottling system on a worldwide scale. The goals of both companies' management teams are further aligned, with a great enhancement to Monster's position as one of the world's leading energy beverage companies. We expect the transaction to significantly accelerate our growth and results of operations internationally, and we plan to review all options available to return a substantial amount of cash to our shareholders," Schlosberg added.

Monster, reported sales of $2.2 billion in 2013. According to the company, the products that would be transferred to Coca-Cola reached $150 million in sales that year. The company's energy-drink saw Monster report $330 million in sales.

Both companies said their sights were set on China, and on enhancing the brand images of all the product lines - for Monster, particularly those in the energy-drink genre.

According to Sacks, with Coca-Cola as a partner, it would be easier to clear regulatory hurdles in China.