Using tactics that are characteristic of environmental group Greenpeace, two of its activists occupied a drilling platform off Greenland to protest oil prospecting in the Arctic early on Sunday. 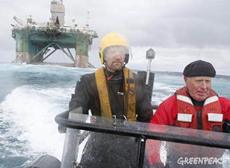 The activists, who arrived by rubber dinghy, climbed the 53,000-tonne 'Leif Eiriksson', a rig due to begin drilling for oil for Scottish company Cairn Energy.

Cairn incidentally is seeking to sell its key Indian assets to Vedanta, the mining conglomerate even more infamous than Cairn for its lack of environmental concern.

The activists placed themselves in a survival pod that now hangs from the platform 30 metres above icy water below, Greenpeace said.

"The two men are in this capsule with enough supplies for 10 days," said Birgitte Lesanner, Greenpeace spokeswoman in Denmark.

Greenpeace evaded a Danish warship to scale and attach a survival pod beneath the controversial deep sea floating oil rig being towed into the Arctic, disrupting plans for extreme, final frontier drilling operations in the pristine Baffin Bay, near Greenland.