Coal and power minister Piyush Goyal said on Thursday that increasing the production by Coal India Ltd (CIL) is a more ''pressing issue'' than that of restructuring, including hiving off the state-run miner's subsidiaries into separate entities. 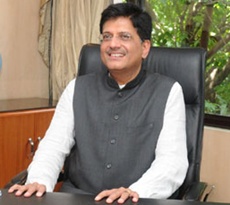 Goyal was speaking after his maiden visit to the CIL office in Kolkata. The minister, who held a four-hour meeting with senior CIL officials, said sorting out environmental issues relating to the clearance of mining projects was the primary concern of the ministry.

''Today I came to Calcutta with the intention of meeting senior officials of Coal India and all its subsidiaries. It was my first interaction and we discussed plans to enhance quantity and improve the practices in the coal sector,'' Goyal said after the meeting.

On the restructuring of CIL, Goyal said, ''Coal India has seven subsidiaries and one is involved in exploration. That is the (present) status of Coal India and continues to be so. More pressing problems are enhancing coal supplies and sorting out issues, both of which are a legacy of inaction, ineptitude and policy paralysis that the sector has faced over many years.''

He said most of the issues relating to raising the production of CIL were linked to environmental clearances. Discussions have been held with the environment ministry on the issue, and a meeting will be held in the next four days in Delhi.

Goyal avoided answering a question on pricing, saying only that there will be an improvement in quality.

''We are looking at best practices. (We) also looked at ways and means to incentivise the employees of CIL to enhance production, particularly because in the last 4-5 years coal output has not matched the demand in the country. It is essential that we ramp up production,'' he said.

Over 200 mining projects of CIL are awaiting environment and forests ministry clearances.