The long-proposed sale of 5-per cent of the government's stake in Coal India Ltd is likely to take place in November or December, union minister for coal Sriprakash Jaiswal said today. 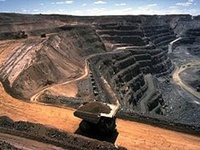 ''It is likely that (the minor disinvestment in Coal India) may happen either in November or December,'' Jaiswal told reporters in New Delhi.

''You may be aware that the Coal India chairman has gone (overseas) for this purpose only,'' Jaiswal said, indicating that the country was seeking foreign investors for the divestment.

The government's disinvestment department (DoD) has embarked on a 'road show' spanning five nations, including Germany and the UK. But the question is will foreign entities be interested in buying a minor stake in a company owned by the government of India; or will it just end as another junket for officials on taxpayers' money.

The road show began last week amid threats by CIL employees to go on strike in December against the government's divestment move.

Jaiswal said that though the production of CIL has been hit in the current month on account of Cyclone Phailin, ''We are hopeful that Coal India will achieve its production target of 482 million tonnes for the current fiscal.''

The government currently hold a 90-per cent stake in CIL. It has already selected seven merchant bankers, including Goldman Sachs, Credit Suisse and SBI Caps, to manage the CIL stake sale which is to take place through the offer for sale route.

The disinvestment department was originally planning to offload 10 per cent stake in CIL, but faced strong opposition from the employees' union.

The CIL workers' union in September decided to defer its proposed three-day strike to 17 December.

CIL got listed on the bourses in 2010 through an initial public offering in which the government raised Rs15,199 crore by selling 10 per cent of its stake.

The company has a cash balance of about Rs60,000 crore; foreign investors have already complained that CIL is not using this cash pile productively.

The government hopes to garner Rs40,000 crore this fiscal from the further 5 per cent stake sale.