The Indian government's ambitious plans to raise $9 billion this fiscal from the sale of equity in state-owned firms got a boost on Thursday, with the Coal India IPO being over-subscribed by more than 12.5 times. 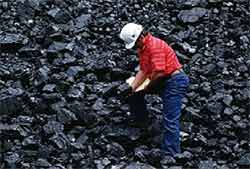 India's biggest IPO, which plans to raise $3.5 billion, got an overwhelming response from both institutional and individual investors. According to bankers managing the IPO, the response from qualified institutional bidders (QIBs), who include both domestic and international financial institutions, was phenomenal, with an over-subscription of 24.7 times.

The shares are now expected to be issued at the highest point of the offer band of Rs.225 to Rs.245, considering the massive response from investors. The IPO by the state-owned behemoth opened on Monday and closed on Thursday.

Analysts predict that the Indian government's plan to divest equity in several public sector undertakings will get a leg-up following the success of the Coal India IPO. The government plans to raise about $9 billion during the financial year ending March 31, 2011 through the sale of equity stake in its companies.

According to Sumit Bose, disinvestment secretary, the sale of shares of the three 'navratna' companies will occur in the last-quarter of the fiscal (January-March, 2011).