Coal India, the world's largest coal producer denied that it is in talks with Australia's Whitehaven Coal, which has a market value of around $2.6 billion to either acquire the company or buy stake in its coal mines.

"Those discussions that are continuing are preliminary and remain incomplete. It is highly uncertain whether they will lead to a proposal for consideration by the company's directors and shareholders."

Although the company did not name the companies or the nature of the transaction, various Australian media had reported that Coal India and China Shenhua Energy Co, the country's biggest coal producer are among the companies that have approached the Australian miner.

Switzerland's Xstrata and Peabody Energy of the US have also been linked to a possible deal regarding some of Whitehaven's coal assets, while Posco was also named by some as a possible runner, but the South Korean steel producer later refuted these claims. 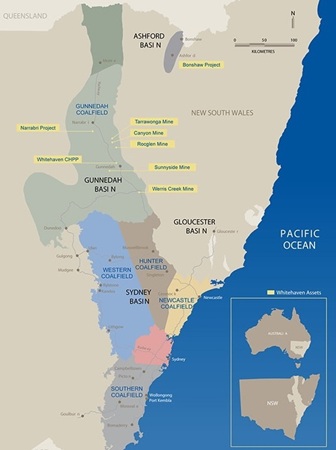 In a phone interview with Coal India's chairman, Partha Bhattacharyya told Bloomberg yesterday that the company has not bid for Whitehaven, while Wang Jinli, vice president of Shenhua Energy, said that he was not aware of the talks.

Whitehaven holds an 11-per cent interest in the Newcastle Coal Infrastructure Group, which is currently developing a new coal export terminal at the Port of Newcastle. This is in addition to its port allocation at Port Waratah Coal Services.

During the fiscal year ended 30 June 2009, Whitehaven completed the development of and began operating from the Rocglen and Sunnyside mines, while the first-stage construction costing $294 million of its Narrabri mine is almost complete.

During its initial production stage, the mine is expected to produce about 700,000 metric tons a year, rising to a planned 6 million tons in mid-2011, the company had said in a statement last month.

The Narrabri project, which is a joint venture, where Whitehaven holds a majority stake of 70 per cent, will give the company a total coal production capacity of 11.5 million tons by 2013, of which, about 4 million tones will be pulverized coal that is used by steelmakers.

Whitehaven last month reported fourth-quarter coal sales for the three months ended 30 June 2010 of 1.041 million metric tons, compared to 1.038 million tons a year earlier, while for the year ended June 2010 coal sales was 4.570 metric tonnes, up by 13 per cent compared to the same period a year ago.

The company, which does not have major overseas customers on its book, had 2009 revenues of A$489.4 million and was able to boost its net income to A$ 244.2 million as it was able to reduce its operational costs from 70.61 per cent to 60.53 per cent.

For the latest June quarter, Whitehaven had signed coking coal sale contracts at $165-$168 a tonne and has indicated a price of $185-$189 a ton for the coming quarter.

According to Crisil Ltd, a unit of Standard & Poor's, demand for coal in India could be 1.4 billion metric tons by 2020, which is largely used by the power generating and steel industry.

There are a total of 86 upcoming coal-fired power projects currently in India, of which 29 are near completion, 29 are under construction and another 28 are at the development stage, awaiting government approvals.

With India's demand of coal outstripping supply, India is expected to import 35 million tons of coal in the year starting 1 April, which is set to rise to 81 million tons in 2011-12.

Coal India's director A K Sarkar had said in March 2010 that the company was urgently seeking strategic alliances in the form of equity or offtake deals with major mining firms in Indonesia, Australia and the US, and has shortlisted 10 companies. (See: Coal India looking for coal resources abroad to bridge supply shortfall)

Coal India, which is planning to come up with the country's largest IPO in October 2010 by raising Rs12,000-crore as part of the Indian government decision to offload 10 per cent of its 100 per cent stake in the company, (See: Coal India looks to Diwali to fire up its Rs12,000-crore IPO plan) is already in advanced stages of negotiations with US-based Peabody Energy for a stake in four of its Australian mines, as well as other international assets, in a deal reported to be worth over $1 billion. (See: Coal India in talks with Peabody Energy for $1-billion stake)

Beijing- based Shenhua Energy, a subsidiary of Shenhua Group and listed on the Hong Kong and the Shanghai Stock Exchange is the world's third largest coal mining company after Coal India and Peabody Energy.

Shenhua Energy, with the country's largest coal reserves, is largest coal supplier and vendor in China. Its output for 2009 was 210.3 million tonnes, up by 13.2 per cent compared to the previous year and had sales of 254.3 million tons after adding external purchases.

It is also involved in coal transportation and electricity generation.