Cisco Systems Inc yesterday said that it is cutting 5,500 jobs or 7 per cent of its global workforce as the world's largest networking gear maker shifts its focus from its core hardware business to software-based systems and services. 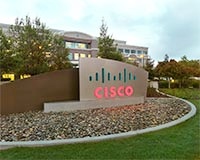 While releasing its fiscal fourth-quarter financial results, Cisco said that it expects to start laying off employees from the first quarter, and take a charge of about $325 million to $400 million in the quarter.

On the whole, the company expects a pretax charge of up to $700 million for severance and termination benefits.

''We need to make some pretty immediate shifts in our portfolio,'' said Cisco CEO, Chuck Robbins in an interview. ''We have rapidly shifting customer expectations. The winners in the future will be the ones that understand those dynamics.''

The company will cut 5,500 positions from its workforce of more than 73,700. Savings from the job cuts will be invested in newer businesses that Cisco expects to fuel sales growth.

Cisco did not say which division would be affected by the job cuts, but the California-based company has recently seen its top executives leaving the company.

The latest round of layoffs comes as the fourth workforce cut in about as many years for a company that was once integral to the internet boom.

In August 2014, Cisco had cut 6,000 jobs over the uncertainty in global demand and the sluggish sales and increased competition in emerging markets. (See: Cisco to cut 6,000 jobs amidst lacklustre quarterly results)

The company, which was once the dominant player in hardware that moved the world's digital information around and between computer centres, now faces challenges from younger companies.

While Cisco's position at the top has remained secure, it has been getting harder it to command the profit margins it once did.

Chuck Robbins is planning to boost growth by moving the company's offerings toward low-cost software-based networking, security and management products.