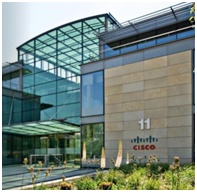 Its best-known product series is StealthWatch, which identifies suspicious traffic patterns inside the network to detect a wide range of attacks.

StealthWatch provides a visual representation of the network to detect anomalies that could signify an attack. In case of an infection, StealthWatch analyzes traffic between servers to determine which hosts were affected and immediately shows infections by a particular piece of malware and which was the first device hit.

StealthWatch is used by Global 2000 enterprises and government agencies, and is also used by Cisco.

Cisco has had a commercial agreement since 2012 to sell Lancope products, and its security business generates $1.74 billion annually.

''As enterprises digitize, security challenges rapidly evolve. Real time visibility and understanding of the behaviour of every machine or device on the network becomes critical in adapting the ability of enterprises to identify and respond to the next wave of cyber threats,'' said Rob Salvagno, vice president, Cisco Corporate Development.

''Cisco is committed to helping organisations defend their networks and devices. Together with Lancope, our combined solutions can help turn a customer's entire network into a security sensor,'' he added.

The Lancope team will join the Cisco Security Business Group led by David Goeckeler, senior vice president and general manager. The acquisition is expected to close in the second quarter of fiscal year 2016, subject to regulatory review.

Cisco routers in India, Ukraine, Philippines and Mexico recently came under attack from a sophisticated malicious software that possibly allowed cybercriminals to filch huge amounts of data without being detected.