The Brazilian government has filed a new $11-billion suit against US oil giant Chevron Corp and Switzerland's offshore oil rig operator Transocean Ltd for a second leak in an offshore oil field, taking the claim amount to nearly $22 billion. 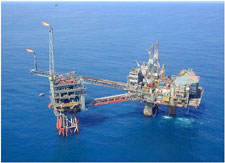 Brazil's federal prosecutor Eduardo Santos de Oliveira filed the lawsuit over a second oil spill off the coast of Rio de Janeiro caused by oil that leaked from cracks on the ocean floor on 4 March.

Chevron said it had underestimated the pressure in an underwater reservoir, and crude rushed up a bore hole and eventually escaped into the surrounding seabed some 230 miles off Rio's coast.

The oil escaped through at least seven narrow fissures on the ocean floor, all within 50 meters of the well head.

The new spill is near the offshore Chevron well where at least 110,000 gallons spilled late last year and the Brazilian government had filed a suit against both companies for $10.7 billion. (See: Brazil sues Chevron, Transocean for $10.7 bn over oil spill)

Chevron committed ''a series of errors'' that led to the March spill at Frade, the second incident at the offshore oil project, the federal prosecutors' office said in a statement yesterday.

Oliveira is also seeking to suspend the companies from operating in the country and block Chevron from transferring profits from Brazil.