Capgemini to buy iGate for $4 bn

Capgemini SA, Europe's largest IT firm, today struck a deal to buy iGate Corp for about $4 billion in cash, in order to expand into the lucrative North American market. 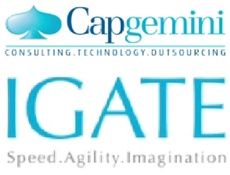 It is the biggest IT services deal after the 2008 acquisition of EDS by HP for $13.9 billion.

Under the terms of the deal, iGate shareholders will receive $48 a share, a 4.7 per cent premium to Igate's last week's closing price.

The merger has been agreed to by the boards of both the companies and a majority 54 per cent of iGate shareholders, including, iGate co-founders Sunil Wadhwani and Ashok Trivedi with a combined 25-per cent stake and Apax Partners with 29 per cent.

Capgemini expects to fund the deal through a combination of cash at hand, debt and equity portion that will not exceed a 6 per cent dilution of the French firm's share capital.

The merged group would have around 190,000 employees and an operating margin of 10 per cent.

iGate generated about 70 per cent of its $1.27 billion revenue from the US last year, and post-closing, North America will represent 30 per cent of the combined 2015 revenue of €12.5 billion ($13.58 billion), raising Capgemini's revenue in the region by about a third.

''iGate is a leading company that perfectly fits our strategic ambition. It will give us a new status on the American market, and take further our industrialisation journey to offer ever more competitive services to our clients. This will also give to the Group's Indian operations a new scale, allowing us to compete on par with the best US-based and Indian-based companies,'' said Paul Hermelin, chairman and CEO of Capgemini.

"We are pleased to have found a great partner for the business and are confident that our employees and customers will benefit from the enhanced service offerings and resources available to them at Capgemini," said Trivedi.

"We are gratified that the company we founded over 25 years ago has developed into a global enterprise with over 30,000 employees, a trusted partner to over 250 clients, a market value of over $4 billion, and one of the most respected brands in the IT industry," said, Wadhwani.

With a global employee pool of over 33,484, iGate is a mid-size IT and BPO services provider.

iGate has multi-location operations, which include the largest offshore software development centre in Bangalore, and with 300 clients it caters to several verticals, including banking and financial services, insurance, healthcare, life sciences, manufacturing, retail, energy and utilities.

iGate and other smaller IT outsourcing services providers compete with Indian heavyweights such as Tata Consultancy Services, Wipro and Infosys on price to win market share.

Two years after former Infosys senior executive Ashok Vemuri was hired to run iGate after the controversial exit of Phaneesh Murthy, growth at the New Jersey-based company continues to lag.

Capgemini operates in more than 30 countries, employing over 1.4 lakh people in North America, Europe, and the Asia Pacific region.

In India, the company has over 60,000 people working across seven locations at Mumbai, Bangalore, Kolkata, Pune, Hyderabad, Chennai, Salem and Gurgaon.

The Paris-based company has a market cap of €12.8 billion and posted net profit of $623 million last year.

The transaction is expected to close in the second half of 2015 subject to regulatory approvals.