Hedge fund mogul Dan Loeb, founder and chief executive of Third Point LLC,slammed legendary investor Warren Buffet in a room full of financiers yesterday, calling the legendary investor an all-seeing hypocrite for his views on everything from hedge funds to taxes. 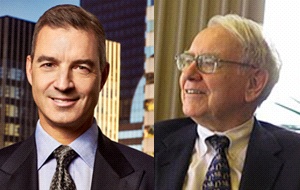 ''I love reading Warren Buffett's letters,'' Loeb said in a Q&A with Anthony Scaramucci from the stage of the SALT Conference in Las Vegas.

''He criticizes financial services companies, yet he invests in them. He thinks we should all pay more taxes but loves to avoid them.''

Loeb let fly the barbs at the end of a 45-minute chat with conference host Scaramucci, in which he talked about his transformation in the 20 years he had run a hedge fund, making ''significant stumbles'' along the way.

According to Loeb, at the time he started out he looked forward to making enough money to retire and surf all day. However, he had since become excited about being viewed as a cerebral financial statesman who got asked to meet with Japan's prime minister and the heads of Japanese corporations.

According to commentators, Loeb's Buffett diatribe might have much to do  with recent events related to Dow Chemical. Loeb, an activist investor, had been urging the giant corporation to make changes, including spinning off a division.

Activist investors are often criticised for their focus on short-term gains, who are out for a quick buck.

Loeb's Buffett comments led to much  embarrassment on stage. Anthony Scaramucci, a master networker, whose fund-of-fund firm SkyBridge Investments ran the SALT investment conference, remarked that his chances of having Buffett at SALT next year were shot. ''Warren Buffett, if you are listening, I'm sorry,'' Scaramucci said.