Remote controls of the physical kind are likely to become a thing of the past, thanks to an extraordinary development from the BBC, which allows people to choose what they want to watch by thought control. 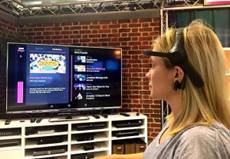 The development would not only appeal to couch potatoes, but also to the physically disabled like those who are completely paralysed.

A prototype app for an experimental version of the broadcaster's iPlayer, which had been tested on BBC staff, allowed viewers to select programmes by simply focusing their thoughts as choices of what to watch appeared on screen.

The 'Mind Control TV' prototype uses brain activity signals, which are relayed from an electroencephalography (EEG) headset which contains two sensors to measure levels of brain activity. It could be operated through concentration or relaxation, depending on whether people chose - the 'attention' or 'meditation' mode.

Commenting on the new app, which had been developed with technology company This Place, Cyrus Saihan, head of business development for the BBC's Digital division, said, ''You can imagine a world where instead of having to get up from your sofa or reach for your remote, you just think 'put BBC One on' when you want to watch TV,'' The Independent reported. He added, ''So does it work? In a word, yes.''

The electroencephalography (EEG) brainwave-reading headset requires fewer moving parts than other wearables, but requires much more attentiveness. With a small sensor resting on the user's forehead and another clipped to the ear, the device measured electrical activity in the brain.

In the case of the BBC the wearer would choose "concentration" or "meditation" as their brain-control mechanism. They would then sit back as the app highlighted each of the five available programmes, changing every 10 seconds.

So suppose the user wanted option four, they would need to wait for the app to scroll through, keep an eye on the "volume bar" to the left, which displayed brainwave activity.

"It was much easier for some than it was for others," Cyrus Saihan, head of business development for the BBC's Digital division, wrote in a blog post. "But they all managed to get it to work."