BP found to be “grossly negligent“ in Deepwater Horizon disaster

BP has spent over $28 billion on damage claims and clean up costs over the four years since the blowout on the Deepwater Horizon oil well killed 11 workers and sent millions of barrels of oil gushing into the Gulf of Mexico. 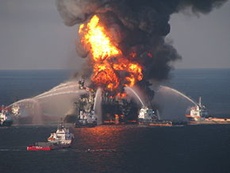 The company had pleaded guilty to criminal charges in US courts, though it had maintained all along that it was not chiefly responsible for the accident and the contractors of the grilling operation, Halliburton and Transocean, were as much to blame, if not more.

However, yesterday a federal judge for the first time threw out those arguments, holding BP primarily culpable for the disaster. The judge further observed that the company had acted with ''conscious disregard of known risks'' and that BP's ''conduct was reckless.''

With the company now being found guilty of gross negligence in the disaster, and not merely neglect, US District Court judge Carl J Barbier has opened the possibility of $18 billion in new civil penalties for BP. This is around four times the maximum Clean Water Act penalty for simple negligence and far more than the $3.5 billion the company had set aside.

According to David Uhlmann, former head of the justice department's environmental crimes division, BP had long maintained that it was merely negligent, Bloomberg reported. He added Barbier ''soundly rejected'' BP's arguments that others were equally responsible, holding ''that its employees took risks that led to the largest environmental disaster in US history.''

The court's findings would ensure that the company was held fully accountable for its recklessness, US attorney general Eric Holder said. He added, the decision would serve as a strong deterrent to anyone tempted to sacrifice safety and the environment in the pursuit of profit.

''BP believes that the finding that it was grossly negligent with respect to the accident and that its activities at the Macondo well amounted to willful misconduct is not supported by the evidence at trial,'' the company said in an e-mailed statement. ''The law is clear that proving gross negligence is a very high bar that was not met in this case.''