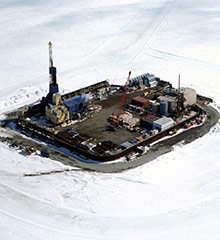 The London-based company did not reveal the financial terms of the deal, but said that the sale includes all of its interests in the Endicott and Northstar oilfields and a 50 per cent stake in the Liberty and the Milne Point fields.

The sale also includes the company's interests in the oil and gas pipelines associated with these fields.

The assets included in the sale represent approximately 19,700 barrels of oil equivalent a day of net production for BP, less than 15 per cent of BP's total net production on the North Slope.

BP, one of the largest oil producers in Alaska, said that the sale does not affect its position as operator and co-owner of the Prudhoe Bay oilfield nor its other interests in Alaska.

In fact BP said in a statement, it "remains committed to its plans for increased investment at Prudhoe Bay, which have resulted from recent oil tax reform by the State of Alaska. The plans include adding two drilling rigs, one in 2015 and a second in 2016, for a total incremental $1 billion investment over five years."

''There are some big benefits from this transaction,'' said Janet Weiss, President of BP's Alaska Region. ''BP will be able to focus on maximizing production from Prudhoe Bay and advancing the Alaska LNG opportunity.

She added thanks to tax reform, "Alaska is now on course for increased investment and production and even the possibility of LNG.''

As a result of the sale, Houston-based Hilcorp is expected to become the operator of the Endicott, Northstar and Milne Point oilfields and their associated pipelines and infrastructure.

''This agreement will help build a more competitive and sustainable business for BP in Alaska'' said BP Upstream CEO, Lamar McKay. ''It will allow us to play to two of our great strengths, managing giant fields and gas value chains. We will now concentrate on continuing development and production from the giant Prudhoe Bay field and working to advance the future opportunity of Alaska LNG.''

The sale, which will be subject to state and federal regulatory approval, is anticipated to be completed by the end of the year.