BP to shut down Bulwer Island refinery in Australia

British oil giant BP today said that it will stop production at its Brisbane refinery in Australia, by 2015, leading to loss of 350 jobs. 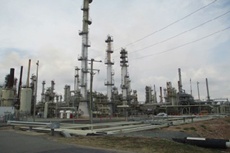 The move comes a after Royal Dutch Shell said in 2012 that it was exiting Australia's refining industry, (See: Shell to shut down Australian refinery)  while Caltex Australia is converting its Sydney refinery to an import terminal.

London-based company BP intends to halt refining operations at its 102,000 barrels per day Bulwer Island refinery in Brisbane, Queensland, and said that the growth of very large refineries in the Asia-Pacific region was driving structural change within the fuels supply chain in Australia and putting huge commercial pressure on smaller refineries like Bulwer.

''It's against this background that we have concluded that the best option for strengthening BP's long-term supply position in the east coast retail and commercial fuels markets is to purchase product from other refineries,'' said, Andy Holmes, president of BP Australasia.

''And while more of our transport fuel demand will be met by imports in future, ample supplies are available to maintain Australia's energy security.''

BP currently employs some 380 staff at the refinery and between now and mid-2015 this is expected to fall to around 25.

The Bulwer Island refinery was built on reclaimed land by Amoco between 1964 and 1965 and was bought by BP in 1984. It produces petrol, diesel, kerosene, aviation fuel, heating oil and LPG.

BP said it was considering turning the facility into an import terminal.

BP expects that it will take around a year to implement the changes required to maintain supply and safely shutdown the process units.

Once processing has been halted, the import jetty, aviation fuel tanks and associated pipelines will remain operational while other storage tanks and pipelines will be placed on a care and maintenance basis pending a decision to convert the site to a multi-product import terminal.