British oil explorer BP Plc has signed a 30-year deal to work on a $16 billion worth of gas projects in Oman. 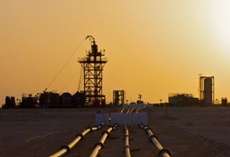 The Khazzan gas project aims to extract around one billion cubic feet of gas per day from deep under central Oman via BP's 'tight gas' extraction technology, which can unlock reservoirs from hard rock.

BP will drill around 300 wells over 15 years to produce about a third of Oman's total daily domestic gas supply. Construction is expected to begin next year, with the first gas expected in late 2017.

The company has already spent hundreds of millions of dollars on the project since winning the concession in 2007. ''This is one more example of BP developing a long-term gas-supply chain, in this case to bring energy to customers in Oman for decades to come,'' chief executive Bob Dudley said.

Since 2007, BP has carried out one of its largest onshore seismic surveys covering 2,800 square kilometres of Oman; it has also drilled 11 wells in the region.

Over 15 years BP expects to develop around seven trillion cubic feet of gas in the Khazzan project, and to pump around 25,000 barrels per day of gas condensate, a light oil, from the field.

The deal also allows BP to appraise more gas resources in other regions of Oman, which it expects to develop later.

"Today's signing is an important step in the Sultanate of Oman's plans to meet growing demand for energy over the coming decades and to contribute to economic development in Oman," the state's oil and gas minister Mohammed Al Rumhy said in a statement after the signing in Muscat.

"The Khazzan project is the largest new upstream project in Oman and a pioneering development in the region in unlocking technically challenging tight gas through technology."

"The country needs the gas to develop its economy," Al Ruhmy told journalists. "Our needs for gas increase day by day."

State-owned Oman Oil Company Exploration & Production (OOCEP) will hold a 40-per cent stake in Block 61, while BP will hold a majority 60 per cent.

The Omani government will take 55 per cent of the gas sales revenues, while the rest will be split between the project partners, with 60 per cent for BP and 40 per cent for OOCEP after deducting costs, the minister told the news conference.

Tight gas reservoir development is particularly technically challenging because the low porosity of the reservoir rock reduces the effectiveness of hydraulic fracturing methods used to flush gas out with pressurized liquids.