British oil and gas giant BP Plc said yesterday that the cost of the Gulf of Mexico oil spill disaster up to 29 September amounts to approximately $11.2 billion, up from the $8 billion reported in the first week of September. (See: BP's Gulf oil disaster costs hit $8 billion and counting). 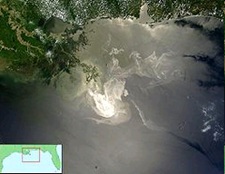 The total cost of the worst oil spill in history includes the cost of the spill response, containment, relief well drilling, static kill and cementing, grants to the Gulf states, claims paid and federal costs, the company said in a statement.

The accidental explosion that occurred on 20 April on BP's Deepwater Horizon rig caused the spillage of approximately 4.9 million barrels of crude oil into the Gulf of Mexico resulting in colossal damage to the environment and inhabitants of the region.

After struggling for five months to cap the blown out Macondo oil well, on 20 September 2010 the oil giant announced that it has successfully ''killed'' the MC252 well after pumping cement into its base through a new relief well drilled for the purpose. (See: BP's Macondo oil well in the Gulf of Mexico finally "killed").

Since the Macondo well was finally confirmed sealed, BP has been completing the process of plugging and abandoning the well. This includes removing portions of the casing and setting cement plugs, the company said.

In a significant announcement, BP also said that it has pledged certain Gulf of Mexico assets as collateral for the Deepwater Horizon Oil Spill Trust, consisting of an overriding royalty interest in oil and gas production of BP's Thunder Horse, Atlantis, Mad Dog, Great White and Mars, Ursa and Na Kika oil and gas assets.

''The pledging of these assets underscores our commitments to the Trust which we set up to pay all legitimate claims arising from the tragedy,'' said Lamar McKay, chairman and president of BP America Inc and BP's Gulf Coast Restoration Organization.