Bridgestone announced recently it has established a groundbreaking technique that can be used to easily, quickly, and accurately diagnose white root rot disease in para rubber trees, which are the primary source for natural rubber used in tires and other rubber applications. 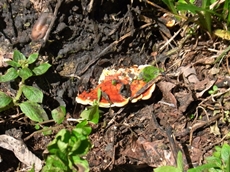 White root rot disease is a disease caused by Rigidoporus microporus, a type of filamentous fungi that affects para rubber trees. By infecting the root and destroying its system, the disease causes the para rubber tree to wither. Early detection of the disease is difficult, and there is currently no fundamental countermeasure for the disease. When an outbreak occurs, the diseased area of the tree is cut off and treated with drugs. Rhizomorphs and fruiting bodies (mushrooms) appear on the infected areas of the tree, similar to the pictures below.

With the establishment of this technique, Bridgestone is supporting to conserve para rubber trees and contribute to a more stable supply of natural rubber as worldwide demand continues to increase.

With the increasing global population and the proliferation of motorised vehicles, the need for tyres is expected to continue to expand in the future. Accordingly, the amount of natural rubber consumed is also expected to increase. In Southeast Asia, where more than 90 per cent of the world's natural rubber is grown, white root rot disease continues to spread due to pathogens in the soil.

Since currently white root rot disease can only be identified by visual inspection, detection accuracy is low.  Visual inspections can only be performed by digging into the soil around the tree. The complexity is time-consuming and often leads to late detections and misdiagnoses, causing damage from the disease to spread.

To respond to this issue, Bridgestone has been working since 2010 with the Indonesian Agency for the Assessment and Application of Technology and numerous universities to promote development of technologies that diagnosis white root rot disease in a prompt manner. 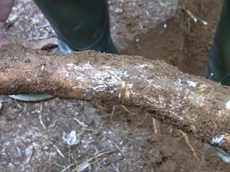 The tyre compny has established the  Loop-Mediated Isothermal Amplification Method (LAMP), a diagnosis technique that utilizes biotechnologies and tht has been developed using a reagent kit based on the genetic structure of the disease-causing pathogens.  The LAMP is a gene amplification technique developed by Eiken Chemicals. The technique amplifies specific DNA arrangements of pathogens in the soil to detect their presence.

This technique that can confirm the presence of the pathogen in the field easily, without the use of special equipment, thus enabling the early detection of white root rot disease

With the LAMP Method, the early detection of white root rot disease is now possible, and it is anticipated that this technique will help control the spread of the disease from infected trees to healthy ones.

In addition, by expanding this technique, which can be utilized regardless of knowledge and experience, damage control and maintenance can be performed easily. In this way, the LAMP Method is expected to have an enormous effect in terms of plantation management as well.