Boeing and Embraer on Tuesday said the Administrative Council for Economic Defense (CADE)'s General-Superintendence (SG) in Brazil has given unconditional approval of their strategic partnership. The decision will become final within the next 15 days unless a review is requested by CADE Commissioners. 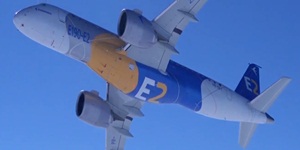 The partnership has now received unconditional clearance from every regulatory jurisdiction with the exception of the European Commission, which continues to assess the deal, the two companies said.
"This latest clearance is yet another endorsement of our partnership, which will bring greater competition to the regional jet marketplace, better value for our customers and opportunities for our employees," said Marc Allen, Boeing's president of Embraer Partnership and Group Operations.
"Brazil's approval of the deal is a clear demonstration of the pro-competitive nature of our partnership," said Francisco Gomes Neto, president and CEO of Embraer. "It will not only benefit our customers, but also allow the growth of Embraer and the Brazilian aeronautical industry as a whole."
Unconditional clearance has now been granted in Brazil, United States, China, Japan, South Africa, Montenegro, Colombia, and Kenya.
Boeing and Embraer have been in discussion with the European Commission since late 2018, and continue to engage with the Commission as it proceeds through its assessment of the transaction.
Boeing on Monday said it remained confident of getting approval from the European Commission, the last hurdle to the transaction.
The European Union has set a 30 April deadline to decide on the deal.
"We have been productively engaged with the Commission to demonstrate the pro-competitive nature of our planned partnership, and we look forward to a positive outcome," Boeing's Allen said. "Given the positive endorsement we've seen from customers across Europe and the unconditional clearance we've received from every other regulator who has considered the transaction, we look forward to securing final approval for the transaction as soon as possible."
The planned strategic partnership between Embraer and Boeing comprises two joint ventures: one joint venture made up of the commercial aircraft and services operations of Embraer (Boeing Brasil – Commercial) in which Boeing will own 80 per cent and Embraer will hold 20 per cent; and another joint venture to promote and develop markets for the multi-mission medium airlift C-390 Millennium (Boeing Embraer – Defense) in which Embraer will own a 51 per cent stake and Boeing will own the remaining 49 per cent.
Boeing has offered to pay $4.2 billion for 80 per cent of Embraer’s commercial jet division, which builds passenger jets in the 70- to 150-seat segment.
That puts it in direct competition with next-generation jets designed by Bombardier Inc and acquired by Europe’s Airbus SE, which rebranded them the A220 programme.
Embraer is the leading manufacturer of commercial jets up to 150 seats and the main exporter of high value-added goods in Brazil. The company maintains industrial units, offices, service and parts distribution centers, among other activities, across the Americas, Africa, Asia and Europe.
Boeing, which is still embroiled in the crisis stemming from two crashes of its 737 Max planes, is excited about the development.
Boeing appears to be watching a new turboprop in the planning at its likely future joint venture partner Embraer with some interest.
A global aerospace company headquartered in Brazil, Embraer has operations in commercial and executive aviation, defense and security and agricultural aviation. The company designs, develops, manufactures and markets aircraft and systems, providing services and support to customers after-sales.
Since it was founded in 1969, Embraer has delivered more than 8,000 aircraft. On average, about every 10 seconds an aircraft manufactured by Embraer takes off somewhere in the world, transporting over 145 million passengers a year.
MORE REPORTS