More reports on: In the news, Telecom 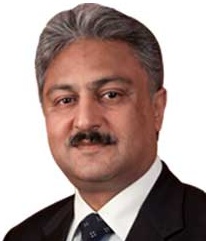 The announcement comes a week after Micromax announced the hiring of Samsung India's mobile chief.

"Sanjay brings with him a global experience, something which we at Micromax are looking forward to as we see the new age of high data usage and better technically equipped smart devices explode around us," Micromax co-founder Rahul Sharma said.

The move also reflects the company's vision of stepping up to the next phase of growth as Micromax continues the journey to become India's number one smart phone player and the first Indian mobile brand to be successful globally, Sharma added.

Micromax hopes to leverage Kapoor's experience in telecom services and his industry expertise.

"I am excited as an entrepreneur to be a part of the promoter group and as a professional to lead the Micromax board and management. I look forward to adding value to all stakeholders leveraging my strengths in building scale, developing brands and understanding consumers," Kapoor said.

He added, Micromax was a very vibrant youth brand that had led the democratisation of technology for the masses, offering affordable innovations to the consumers.

"Proliferation in data services and cutting-edge devices that make technology affordable for masses will be critical for next phase of growth and I am confident that Micromax will lead this transition," he said.

Kapoor had played an active role in prominent industry fora such as GSMA, CII, COAI and NASSCOM over the past 13 years and Micromax expects the move to help strengthen its position in the segment.

Smart phone sales in the country grew almost three-fold to over 44 million in 2013, buoyed by affordable devices made by local firms such as Micromax and Karbonn, according to International Data Corporation.

Samsung maintained its leadership in the smart phone market with a 35 per cent market share in Q1, followed by Micromax (15 per cent), Karbonn (10 per cent), LAVA (6 per cent) and Nokia (4 per cent), according to IDC.