New Delhi: BenQ has launched its new short range digital projector the BenQ MP771.
The new projector provides projection for places where the projector has to be placed close to the screen. The  BenQ MP771 projector's short-throw ratio lens projects a picture of size 74'' from a distance of 3.3 feet, overcoming space constraints that is a common problem in offices these days. 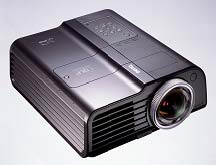 ''Traditionally, it was thought that a big space is required for a projector to produce large sized image and a white screen for superior image quality,'' said Ish Bawa, marcom head, BenQ India. ''The BenQ MP771 combines the ease of using the projector in a small room with better-quality image without a perfect white screen. The new projector is particularly beneficial for those business houses, which have small and not-so perfect meeting rooms.''

Such a projector can be used inside museums, showcase displays, departmental stores, banks, hospitals and small business houses where projectors have to be placed as near to the screen as possible.

BenQ MP771 projects at native XGA (1024 X 768) resolution and features a high brightness of 3000 ANSI lumens with a contrast ratio of 2000:1. Since the projector is equipped with short-throw ratio lens, the quality of projection does not get affected with change in the type of hall/room or the distance between the projector and the screen.

Apart from BenQ MP771 being a short range projector, it also features the Brilliantcolor technology that enables 50 per cent brightness increase in mid-tone hues, resulting in brilliant quality images, the 3D color management technology that allows users to fine-tune the six colours independently for hue, saturation to suit the requirements of specific applications, the off and go function and a detachable keypad.