In a break from the tradition that automobile manufacturers don't position their new launches in direct competition with a rival's product, Rajiv Bajaj, managing director of Bajaj Auto, makes no bones that the company's new and 'best' product, the Dominar 400, is meant to take on the venerable Royal Enfield Bullet. 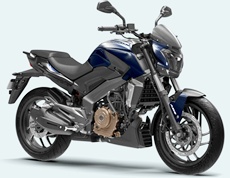 Launching the 373cc premium sports bike in Delhi, he said the company was entering a "segment that has an existing tall leader with 80 per cent market share. This segment is not open for anyone to simply enter and walk away with the market," he added in a reference to Eicher Motor's Royal Enfield range.

Bajaj Auto's stock price closed at Rs2,674.65 on the BSE on Thursday, up almost one per cent from the previous day even as the bnchmark Sensex declined 0.3 per cent. The stock of Eicher, which gets about 70 per cent of its profits from Enfield, declined 1.4 per cent.

Bajaj is also the most valued two-wheeler company in the country, with market capitalisation of Rs77,395 crore.

Online bookings for the motorcycle commenced from Thursday and the Dominar will be sold through 80 showrooms in 22 cities.

"To sell volumes, you need to have a niche product. One has to be the opposite of what the market leader is," said Bajaj, positioning the Dominar as a powerful yet comfortable, large yet manoeuvrable, premium yet not out of reach, product for customers. Listing design, performance and price as three critical factors for any motorcycle, Bajaj said the Dominar would create a difference in all three.

"A better product can just satisfy a customer but does not lead to customer acquisition. It is only by creating differentiation in the form of an altogether new category that we can take away somebody else's customer and market," he said.

The company aims to sell at least 10,000 units a month in the domestic market, where deliveries will begin from next month. Exports (Bajaj is the country's largest two-wheeler exporter) could start from February and average 5,000 units initially. Rival Eicher sells close to 53,000 motorcycles a month and ships over 1,000 units abroad.

Calling Siddhartha Lal, the managing director and chief executive officer of Eicher, a friend, Bajaj said if people want to go faster than the Enfield Bullet, they should try the Dominar.