The workers union at Bajaj Auto has given notice regarding plans to stop work at the company's Chakan plant from 28 April, the company has informed the Bombay Stock Exchange (BSE). 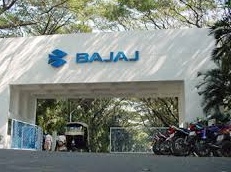 The notice, issued by the Vishwakalyan Kamgar Sanghatana earlier this week, states that it proposes to call for stoppage of work by all employees at the plant from the morning shift of 28 April 2014.

The company said the notice is about stoppage of work and not a strike.

The workers' union has yet again raised its demand that all workmen at the company should be given an option to subscribe to 500 equity shares of Bajaj Auto at a discounted rate of Rs10 or else they have threatened to stop work from the morning shift of 28 April 2014.

"To monitor the CSR activities a joint committee should be established with 2 representatives each from the union and the management," the union demanded in its note.

Kailash J Zanzari, VP, manufacturing, motorcycle, Bajaj Auto, said there is no change in the company's position and there was no discussion with the union on this.

Rajiv Bajaj, MD, Bajaj Auto, has already said the union's demands were insane and that they could face strict action this time.

"If the demands of the union were somewhat preposterous the last time in June 2013, they are entirely insane this time around. It seems to me that with some of the irresponsible union leaders and members, the management is guilty of sparing the rod and spoiling the child," according to a signed statement issued by the company management on Thursday.

This threat to stop work is a continuation of the union's charter of demands made in June 2013, which included revision of wages and issue of company's shares to workers free of cost.

The standoff at the Chakan plant had impacted production and with the plant closed for almost 50 days last year, the company had to resort to moving production to its Waluj plant in Aurangabad to meet market demand.

Bajaj says a majority of its workers are responsible and the company will ''ensure the safety of the majority of our colleagues who wish to continue to work, as also the continuity of production so as to protect the interests of our customers, dealers, and suppliers."