The government has given the 'go ahead' for use of quadricycles for city transport, clearing the way for Bajaj Auto's RE 60, the first company to apply for such category of vehicle to run on the Indian roads. 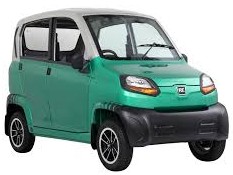 The quadricycle will, however, be allowed to be used only for commercial purposes and that too with a symbol 'Q' for identification.

The decision was taken at a meeting chaired by Vijay Chhiber, secretary, road transport and highways, to discuss the issue of amendment of the Central Motor Vehicle Rules (CMVR) to include quadricycle.

This has been included as an additional category of vehicle, to be manufactured and registered in the country.

The development comes as good news for Bajaj Auto, which last year unveiled the quadricycle codenamed RE60.

The vehicle is powered by a 200 cc petrol engine with a top speed of 70 km per hour and with a mileage of 35 km per litre.

''It was decided that a separate category be proposed for notification to include quadricycle with specifications adopting present norms notified in the 3-wheeler category (L5) in the CMVR or the European Union (EU) quadricycle, whichever is more stringent,'' the ministry of road transport and highways said.

These categories of vehicles are recommended for registration under commercial transport category for intra-city movement within the municipal limits only, it added.

The ministry said the prescribed norms are applicable for a period of six months and any further modification or revision of norms for this category of vehicles will be made from time to time.

According to the ministry, the quadricycles with fully-enclosed structures with hardtop and doors are safer than 3-wheelers which have only flexible top and no doors.

''The quadricycle is expected to be a substantial upgrade over the 3-wheeler auto, which currently provides for the last mile connectivity in most urban areas of the country.

The ministry, however, made it clear that the quadricycle will be permitted to ply on roads only by licensed driver and after due registration.