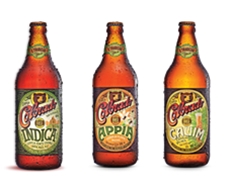 Most of its production is exported to France and the US, and the company is reported to had revenue of about 19 million reais ($6 million) last year.

Ambev, formally Companhia de Bebidas das Américas, is the biggest brewer in Latin America and the fifth in the world.

Formed by the 1999 merger of two breweries, Brahma and Antarctica, Ambev owns popular brands like Brahma, Antarctica, Bohemia and Skol.