The Enforcement Directorate has summoned Karti Chidambaram, son of former finance minister P Chidambaram, for questioning under the Prevention of Money Laundering Act for his alleged role in the Aircel-Maxis telecoms deal. 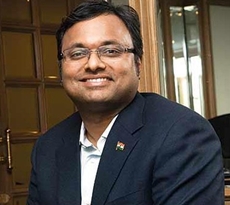 The ED had two months ago sent letters rogatory (judicial requests) to the UK and Singapore in connection with its money laundering probe in the Aircel-Maxis deal and parallel investigations in the financial transactions of some companies belonging to friends of Karti.

The agency, along with the Income Tax Department, had conducted multiple searches in Chennai and Bengaluru in this case in the recent past and the LRs, reports said, aim to obtain further details on these firms which the Enforcement Directorate is also probing for alleged contraventions of foreign exchange laws.

The latest probe also reportedly pertains to firms identified as Advantage Strategic Consulting Private Limited and Chess Global Advisory Services Pvt Ltd, where Karti had been a director, and a few others for alleged violations of the Foreign Exchange Management Act (FEMA).

The agency had conducted search and seizure operations on the business premises of Chess Global firm in Chennai in the presence of Karti last December. The LRs are expected to throw more light on the complex web of operations of these firms which are spread to over a dozen countries including UK and Singapore.

While Karti has denied any wrongdoing and has reiterated his willingness to cooperate with probe agencies, his father P Chidambaram has accused the government of launching a "malicious onslaught" against his family. "If the government wishes to target me, they should do so directly, not harass friends of my son who carry on their own businesses and have nothing to do with politics," he had said.

The ED was also getting in touch with a number of countries like the UAE, South Africa, the US, Greece, Spain, Switzerland, France, Malaysia, Thailand, Sri Lanka and British Virgin Islands on a reciprocal arrangement basis to obtain further leads in the two cases.

The probe agency, in January, had filed a charge sheet in the Aircel-Maxis deal that was a part of the 2G spectrum allocation scam and had named former telecom minister Dayanidhi Maran, his brother Kalanithi, his wife Kavery Kalanithi and few other individuals and two companies as accused in the case filed under the PMLA.

The agency had also told the court that further probe relating to Foreign Investment Promotion Board (FIPB) approval in the Aircel-Maxis deal and related issues are subject of further investigation under anti-money laundering laws.

It had said the approval was given when Chidambaram was finance minister in 2006.