Ahead of Prime Minister Narendra Modi's visit to the headquarters of the European consortium Airbus in the French aviation and defence production hub of Toulouse, Airbus Industries is reported to have struck deals with six Indian engineering firms to bid for 100-helicopter order of the Indian Navy. 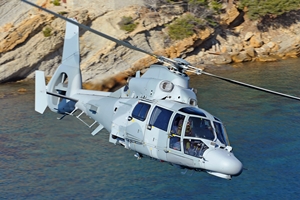 Modi who will go on a three-nation tour of Europe on 9 April, is expected to use the visit to push his government's 'Make In India' initiative.

The Navy is reported to be peeved at Airbus partnering with multiple Indian vendors to bag the contract for the Navy Utility Helicopters Programme, which is tentatively valued at $1.5 billion.

Partnering with six Indian companies would allow Airbus to make six different quotes so as to reasonably ensure that it wins the contract.

The strategy clearly is to put Airbus in an advantageous position vis-à-vis other bidders in winning the contract and this is worrying the Navy, which wants the process to ensure that the helicopters meet the Navy's requirement and the prescribed standards.

Airbus indicated its plans during request for information (RFI) made under the `Buy & Make (Indian)' category, in accordance with the Defence Procurement Procedure, 2013, under which only Indian firms can respond to the RFI and the terms allow them to discuss tie-ups with multiple foreign Original Equipment Manufacturers (OEM).

The (naval) officials said Airbus's approach calls for clarity on whether there is any restriction on the number of bids a company can make at the 'request for information (RFI)' stage itself.

At the recently concluded Aero India, Airbus Helicopters (formerly known as Eurocopter) had proposed to set up a joint venture for the production of helicopters with an Indian partner, with Airbus as the majority stake holder.

Airbus already has stakes in many big-ticket Indian defence deals on the anvil. These include a $2-billion contract for eight Airbus A-330 MRTT mid-air refuellers, which have been pending for over two years.