More reports on: In the news, Aviation

The Central Bureau of Investigation (CBI) has registered a case against Air Asia Group CEO Tony Fernandes and others for alleged violation of rules and manipulation of government policies for securing international flying licences. 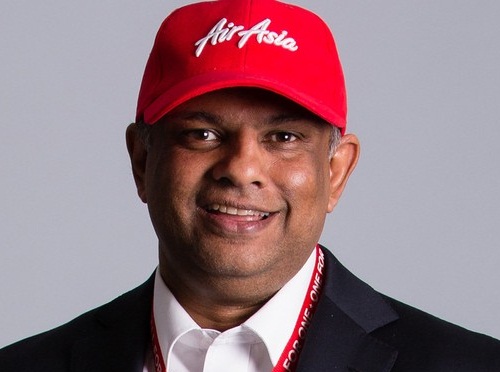 According to the CBI, directors of the aviation company used corrupt means to manipulate government policies to get the rules that require airlines five years of domestic operations and at least 20 operating aircraft (called 5/20 rules) to be relaxed. in order to be eligible for licenses to operate international services.
Air Asia India also allegedly violated of Foreign Investment Promotion Board (FIPB) rules, reports quoting civil aviation ministry officials said on Tuesday.
Besides Fernandes, the others named as accused include former deputy group CEO of Malaysia-based Air Asia Berhad Tharumalingam Kanagalingam (also known as Bo Lingam),  Bengaluru-based Air Asia India Ltd director R Venkataramanan, Air Asia India Pvt Ltd and Air Asia Berhad.
"The case has been registered under 120-B (criminal conspiracy) under the IPC and sections 13(2) read with 13 (1) (d) of the Prevention of Corruption Act. The searches took place at five locations in Delhi NCR, Mumbai and Bengaluru," CBI spokesperson RK Gaur said today.
According to the CBI, Venkataramanan was lobbying the government to secure mandatory approvals, some of them through ‘non-transparent means’, including the then Foreign Investment Promotion Board (FIPB) clearance, no objection certificate and the attempt for removal or modification of 5/20 rule.
The company is yet to get international flying permit as it currently has only 18 aircraft, they said.
Fernandes wanted Air Asia India to operate international flights from the day of granting flying permit in May 2014, it alleged.
Tony Fernandes and Venkatramanan, nominee of Air Asia’s local partner Tata Sons, have been lobbying in government to get all approvals, including FIPB clearance and to amend or remove existing 5/20 rule for international operations, the FIR has alleged.
The agency has also named Rajender Dubey, director of Singapore-based HNR Trading pte Ltd, Sunil Kapur, chairman of Total Food Services, Mumbai and Deepak Talwar, principal and founder DTA consulting, New Delhi, and HNR Trading as alleged lobbyists who used their influence to get 5/20 rule relaxed ‘before General Elections of 2014’.
It is alleged that Dubey was instrumental in seeking appointments and facilitating meetings for officials of AAIL with officials in the ministry for getting clearances.
CBI alleged that in December 2014, Kapur along with Bo Lingam handed over a closed packet containing cash of Rs50 lakh to one Sriram at the coffee shop in the Four Season, Mumbai Hotel, to facilitate the removal of the 5/20 rule.
In return the catering contract for the airlines was given to Kapur as a ‘quid pro quo’, it has alleged.
The FIR has alleged that a secret note was sent on 27 February 2014 to the union cabinet to amend the rule followed by a supplementary note on 5 March 2014 which was not approved since the Election Commission had announced the Lok Sabha general elections on 5 March 2014.
Air Asia (lndia) Limited remitted about Rs12.28 crore to HNR Trading Pte Ltd Of Dubey for a 'sham contract’ on the basis of a bogus agreement on plain papers, it was alleged.
This money was allegedly utilised for paying bribe to unknown public servants of and others for securing permit for international operations through Talwar and Kapur who acted lobbying agents, the FIR said.
"Air Asia India Limited refutes any wrong doing and is co-operating with all regulators and agencies to present the correct facts. In November, 2016 AAIL had initiated criminal charges against its ex-CEO and had also commenced civil proceedings for such irregularities. We hope to bring early resolution to all such issues," Shuva Mandal, director, Air Asia India Limited, said in a statement.
MORE REPORTS